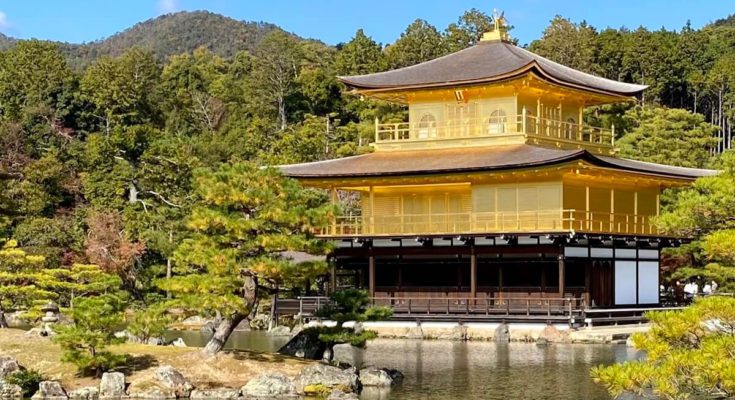 See how brilliant it is!  As you know, this is Kinkakuji temple (金閣寺, Temple of the Golden Pavilion), which is one of the most worldwide attractive sights. Most tourists will visit this temple while in Kyoto and must be struck by the beauty.

However, this temple doesn’t only show us its splendor here. I can’t help feeling that it’s telling us something behind the charm.

There’s no doubt that a little more knowledge about this temple would arouse your interest in it. I’ll share how to enjoy Kinkakuji 10 times more!

For common information about this temple, please click the link at the end of this blog. I tried to avoid overlapping the contents of this article with the official site as much as possible.

There’s something I’d like you to take a look at before visiting Kinkakuji. It has nothing to do with the temple, though.

Look up diagonally right at the point about 20 to 30 meters ahead of the gate. It’s Mt. Hidari-Daimonji. You can see a kanji character “大,” which means “big,” on the hill. We have an annual fire event called Daimonji or Gozan-no-okuribi  on August 16th.

It’s no exaggeration that Kyoto city has strict rules about building height so that we can see the bonfires from anywhere in Kyoto city held on only one day a year. This is our way of preserving tradition.

After passing through the main gate, the route is one-way. I’ll introduce each spot in order.

First of all, we can see a boat-shaped washbasin on our right. It used to be a watering place for horses.

Next, Bell Tower is on our left.

Most big temples have Bell Towers like this. On New Year’s Eve, we ring the bell 108 times. It is thought that we human beings have 108 worldly sins in Buddhism. So, we strike the bell 108 times at the end of the old year to get rid of these worldly desires and welcome the new year, which is called Joya-no-Kane (除夜の鐘).

This is a building called Kuri, which used to be a kitchen, where we can now experience Sutra copying (写経, Shakyo).

Kuri is on our right just before the ticket office.

The picture below is an admission ticket. You can keep this as a good luck talisman. We usually put it over the entrance door. Then, it will bring happiness to our families.

To explain it in briefly, this building was built by Ashikaga Yoshimitsu (足利義満), who was the third shogun of the Muromachi shogunate, in 1397. It was originally his retirement villa. According to his will, it turned into a Zen temple of the Rinzai sect officially called Rokuon-ji (鹿苑寺) after his death.

The present building was reconstructed in 1955. The original one was set on fire by a 21-year-old novice monk training at this temple in 1950.

As you can see, the building consists of three floors. Each floor represents a different type of architecture. The first floor was modeled on a house of Emperor and Heian Era nobility. And the only first floor is not covered in gold leaf. The second floor was built in the style of samurai warrior’s houses. The third floor is in the Zen temple style.

Hmm, there’s something meaningful about the building structure! Can you imagine what Yoshimitsu alluded to?

We’d say, in a nutshell, the lowest floor uncovered with gold symbolizes the aristocracy, the middle floor represents the samurai, and the top floor implies Yoshimitsu himself. He had already become a monk two years before he built Kinkakuji. Or, some think the third floor would imply China because it has the Chinese Zen Hall style in honor of the Ming dynasty.

Anyway, Yoshimitsu built this gorgeous building to show off his power to people not only in Japan but also in China. He also welcomed important guests from China to this building as well. Actually, he succeeded in restarting trade with China about 500 years after we stopped the trade in 894. It goes without saying that he gained a large profit from the trade.

Unfortunately, we are not allowed to enter the building. We can only see the interior of the first floor over the pond.

The phoenix (鳳凰, Ho-o) is on the top of the roof. It’s a symbol of rebirth and happiness as well in Japan. Yoshimitsu might’ve wanted to say that it is himself.

It’s said that if you don’t see the garden of Kinkakuji, you can’t really claim, “I saw gardens in Kyoto.” The garden here is just that splendid.

This pond is called Kyokochi (鏡湖池), which literally means “Mirror Pond.” We can see an upside-down Golden Pavilion in the pond.

There are also several islands in this pond. The biggest one, called Ashihara-jima (葦原島), symbolizes Japan. Yoshimitsu even made the Japan island here. He must’ve been satisfied with saying,” Now I can control all over Japan,” looking down at the Japan island from the third floor or going around it in a boat.

Try to look for the turtle island and the crane island. The crane and the turtle are symbols of longevity as there’s a proverb in Japan, “ A crane lives for 1,000 years, and a turtle 10,000.”

This pine tree was originally Yoshimitsu’s beloved bonsai (盆栽), and he planted it here more than 600 years ago.

What shape do you think this pine tree looks like? It looks like a boat, doesn’t it?  And the raked gravel waves on the ground, which we call samon (砂紋), represents water or the ocean. In fact, this boat faces west because it’s thought that there is Paradise in the west in Buddhism. So, it’s about to sail for the west, or Pure Land!

Ginga-sen (銀河泉)  literally means Galaxy Spring. It’s said that Yoshimitsu used this water when he made tea, and also he purified his hands here, Genka-sui (厳下水), for tea ceremony.

Here’s Ryumon-no-Taki (龍門の滝), meaning Dragon’s gate waterfall. That stone is called Rigyo-seki (鯉魚石, Carp stone). Don’t you think it looks like a carp? Now it’s swimming up the waterfall. In a story from a Chinese legend, a carp transforms into a dragon after climbing up a waterfall. It means you will leap straight to the top!

Here are some stone statues and a stone bowl in the center. Visitors try to throw a coin into the bowl. Just give it a try with a one-yen coin, which is the most difficult to control.

It’s called Hakujya-no-Tsuka (白蛇の塚), which means “White snake mound.” A white snake has been enshrined there. And it’s said that the white snake is a god of water. Actually, this pond called An-min-taku (安民沢) has never dried up thanks to the white snake.

This is a teahouse with a thatched roof called Sekka-tei (夕佳亭), which means “Beautiful Teahouse in the Evening.” This is the best place to see the brightening Golden Pavilion at sunset.

Kouro (香炉) means an incense burner. If you have some injuries or pain in your body, you might as well try to fan the smoke from incense sticks onto the parts you want to heal. It’s believed the smoke will ease the pain and you will feel better.

Now you know that Kinkakuji is not only famous for its shining building, but also the paradise where Yoshimitsu put his thoughts into the buildings, the garden and everywhere.

I’d like to think that this article helps you enjoy Kinkakuji 10 times more. 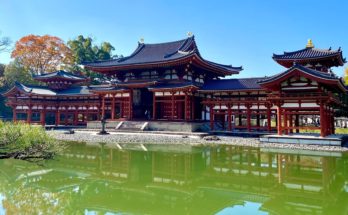 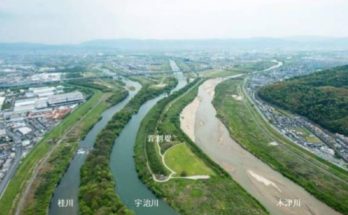 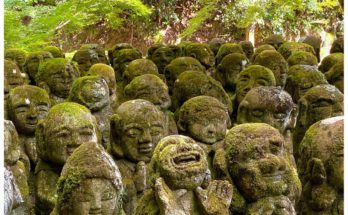 6 Comments on “Kinkakuji -how to enjoy Kinkakuji 10 times more-”