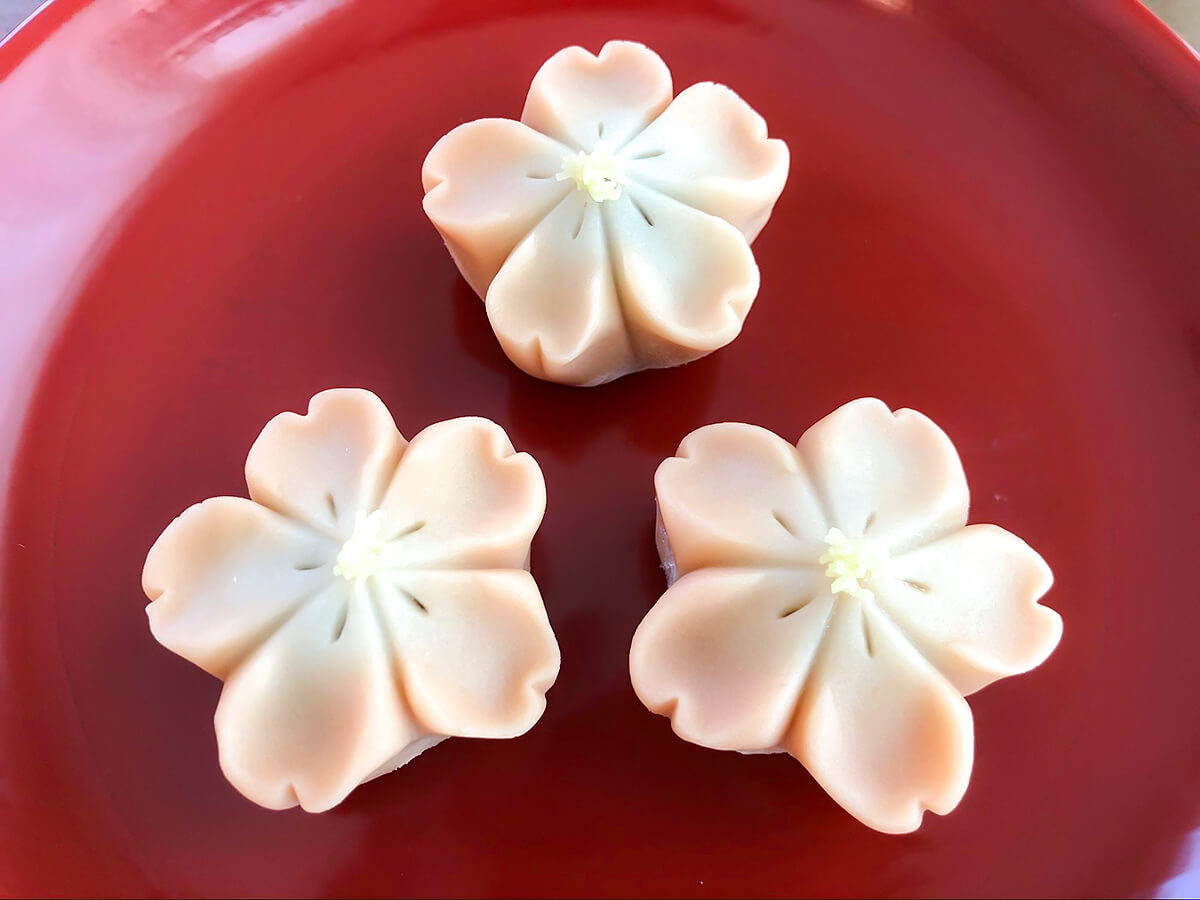 Have you ever tasted wagashi? Do you like them? I love most kinds of sweets! I work as a Japanese sweets confectioner in a small town, so I’d like to tell you all about the good parts of wagashi.

And jo-namagashi (上生菓子) is a creative and sophisticated Japanese sweet, typically such as nerikiri, gyuhi, yokan, and so on. Jo-namagashi is usually served at tea ceremonies. It’s a high-class product and the creators make the products very carefully by using their own five senses. It’s said that jo-namagashi is an artwork you can eat!!!

Also, higashi (干菓子) and beika (米菓) have very little water in them. These types of dried sweets, such as senbei and arare, are long-lasting.

There are also many other traditional Japanese sweets, though…

Wagashi products are made in a wide variety of shapes. They traditionally reflect festivities and each beautiful season. You can see different wagashi depending on which shops you go to, or which regions and areas you’re visiting all over Japan. So, you can enjoy wagashi from a very wide perspective!

Many wagashi products are made with an (餡). This is pronounced like “on” in English. I think an (formally known as anko) is essential for wagashi. Now, I’ll talk about an a little.

An (anko) is translated as “sweet red bean paste/jam” in English. In traditional Japanese sweets, actually, there are many different flavors of an, like shiro-an (white bean paste made from kidney beans or white beans), imo-an (contains sweet potatoes), kimi-an (contains yolks), goma-an (contains sesames), etc.

However, sweet red bean paste is very common. It’s made from red beans called azuki (小豆). Azuki has plenty of dietary fiber. It’s believed that azuki could keep evil spirits away, so it’s been loved by Japanese people for a long time.

*In my shop, tsubu-an is made from red beans and hakuzara. I try as carefully as possible not to mash the grains of azuki, so there is a bit of grain left. This gives the tsubu-an a nice texture!

☆Koshi-an: Ingredients are roughly the same as tsubu-an, but both ways of making are different.

*In my shop, koshi-an is made from red beans and hakuzara. When I make koshi-an, I make it very carefully. I take red beans, boil them, and remove the skin. Then I strain the boiled red beans to remove the bean scum. It’s strained many times. So, koshi-an has a very smooth texture. It’s light and not too sweet. The color is generally a deep purple color, but my handmade koshi-an is kind of light purple.
Each shop across Japan has a different way to make an and a passion for the quality of ingredients. So, I hope you will find your favorite an (餡)!!!

Here are two recommended products of wagashi from namagashi. I guess many international people who are interested in Japan have heard of daifuku (大福). It’s really popular in Japan. First, I’ll share daifuku with you!!!

Daifuku is basically a soft rice cake filled with an. There are a lot of flavors of daifuku, like mame-daifuku (with beans), kusa-daifuku (with Japanese mugwort), shio-daifuku (with salt), Fruit-daifuku is kind of ichigo-daifuku (strawberry), budou-daifuku (grape), etc.

Among them, I especially recommend ichigo-daifuku. It’s commonly made of omochi (from sticky rice) and stuffed with shiro-an (sweet white bean paste), but some other shops use glutinous rice flour for making the dough and use koshi-an or tsubu-an as the filling. And one strawberry is in the product.

“Ichigo” means strawberry. Strawberry season starts around mid-December in Japan and it can probably be harvested until around May. So, you can enjoy having ichigo-daifuku from December through early May in Japan. I love ichigo-daifuku because it has a hint of sourness and a hint of sweetness. Please give it a try, when you visit Japan!

I’ve been writing this article now in March. I need to make a lot of ohagi in March and September for a traditional event called ohigan. So, I’d like to talk about ohagi next.

“Ohagi” is also called botamochi (ぼた餅、牡丹餅). Depending on the season,it may have a different name. I’ll explain:

As I said before, in Japan, there is a traditional, seasonal occasion in March and September.

It’s called ohigan (お彼岸) and lasts for one week. There is the vernal (autumnal) equinox day in the middle of the week.

Ohagi (botamochi) is often made even at home. My grandmother used to make it for me. Although it’s made of the same sticky rice as “omochi (rice cake),” it’s easier to chew and eat than omochi. If you’re interested in ohagi (botamochi), please check it out!

I’m going to stop here for today. Thank you for reading my entire article! I’d like to talk about jo-namagashi next time. I hope to see you soon!

Thank you so much, Megumi, for your beautiful photos! The first photo below this title and the 3 included photos with the asterisk (“＊”) were shared by Megumi. She works for “ 和工房いとをかし.”

The other photos are from my shop.

I live in Kochi prefecture. I love Kochi! It’s a really nice place! I’ve been working as a Japanese sweets confectioner for 15 years. I make koshi-an, some types of omanju and daifuku, ohagi, dango, warabi-mochi, and so on.