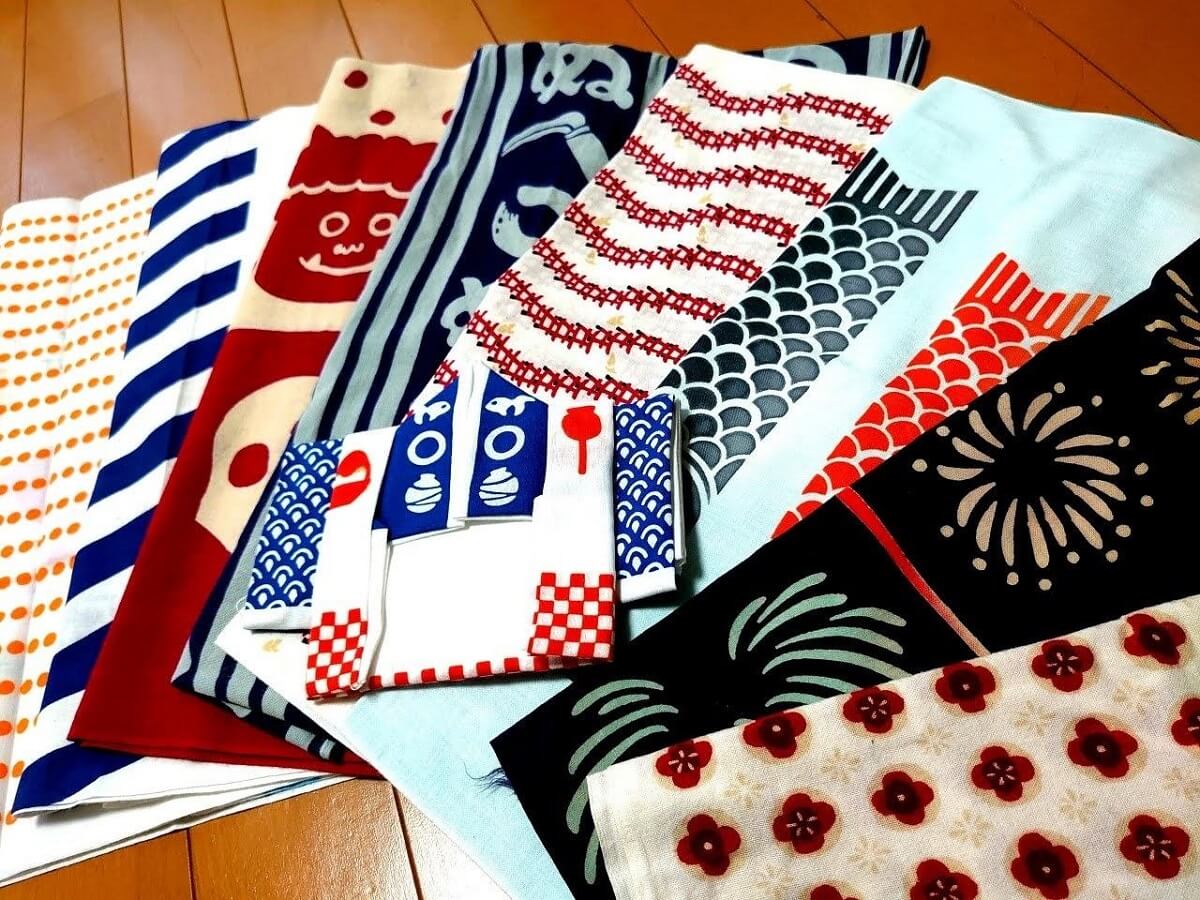 I will take you into the world of Japanese hand towels. Let’s get started!

Japanese hand towels, “Tenugui:手拭い,” literally mean “cloths used for wiping your hands.” They are normally one size of 35cm by 90cm and untrimmed. The size is nearly the same as the typical face towels. Above all, it’s very thin and light so it’s handy to carry in your bag. Tenugui used to be an important part of daily life for Japanese people back in the day. Nowadays, when it comes to the towels, western ones are most commonly used in Japan but many Japanese people still love Tenugui.

To give you a brief history of Tenugui, before the Edo period, clothes were very expensive, so Tenugui were only used by people of high status or for a religious purpose. Entering the Edo period, cotton was richly cultivated.  Cotton cloth kimonos for daily wear were produced, and Tenugui was then created from the scrap cotton cloth leftover from making the kimonos, after which it became a daily essential.

Tenugui is durable, useful, and convenient, so it became widely popular in the daily lives of ordinary people. Furthermore, its use became a matter of both function and fashion. Most people tend to think that towels are just for drying things off and wiping things up—but Tenugi is built for so much more than that! Tenugi’s many uses are not only functional, but also for adding style to one’s outfit.  It was loved as a chic “iki” (粋) fashion item. There was a Tenugui competition where people showed off their own Tenugui in a fun way.

There are two ways to dye tenugui, One is Chusen “注染”, another is Nasen “捺染”. Chusen is a way to dye the clothes manually by hand where the craftsmanship most stands out. As its name suggests, this technique is to pour dye colors into the clothes. It can dye multiple colors all at once. Chusen is characterised by the beautiful gradation that the outlines are soft and blurry. Tenugui dyed by Chusen is the same on both sides, not two-faced. On the other hand, another technique Nasen is imprinting only one color into the surface of clothes with one frame. It’s just like a block print. With this technique, the outlines of each design are a lot clearer than Chusen technique, and it can portray a delicate design. Nasen is produced by mass production using machines. Dye colors don’t reach the back side, so it has clear two faces of the front and back. And it’s a relatively affordable price!

How to use Tenugui?

As I mentioned earlier, Tenugui are very useful and interesting towels. There are a lot of ways to use them—its functions are not only just as towels or handkerchiefs. It dries quickly and is hygienic because of the untrimmed style. You can also use it however you like because of its thinness. For example, tying it around your head like a cap or a scarf to protect from the dust or sun. In case of an emergency, you can also tear it by hand and use it as a bandage. You can also use them as a wrapping paper for a gift, as a place mat on the table, a wall decoration, an interior decoration to cover some stuff, and a fashion item to add for the day. Tenugui has tons of designs and colors, both traditional and modern, and are also seasonal. If you are good at sewing, it’s the best cloth to do for a baby dress because it feels comfortable and super absorbent. The more you use it, the more usable, comfortable, and softer it becomes, just like leather items. And after enjoying using those Tenuguis for a long time, finally, you can make use of them as cleaning cloths. You can wipe down the window and the floor with them and make things really shiny!

Of course, I’m a Tenugui lover. I usually use Tenugui as wall decorations, handkerchiefs, kitchen towels and scarfs. I love that feeling to touch on my skin so much. So I’m always recommending Tenugui to my friends. Tenugui are amazing towels!!

How was it?  Now do you want to get wrapped up in Tenugui?
Tenuguis are beautiful, comfortable, convenient, light and reasonable. If you bring even just one Tenugui in your bag, you’ll be certain of its usefulness.

Where do you buy it?  Don’t worry. There are many Tenugui shops all over Japan, you can easily find them at souvenir shops or shops which sell towels and handkerchiefs. Especially when you visit a sightseeing area, you can find a special local design. If you have a chance to visit Japan, please look for Tenugui of your choice. And try to find YOUR own special way to use it. I’m sure you will love Tenugui!!

Thank you very much for reading my article through the end.

5 Comments on “Get wrapped up in Japanese hand towels “Tenugui””