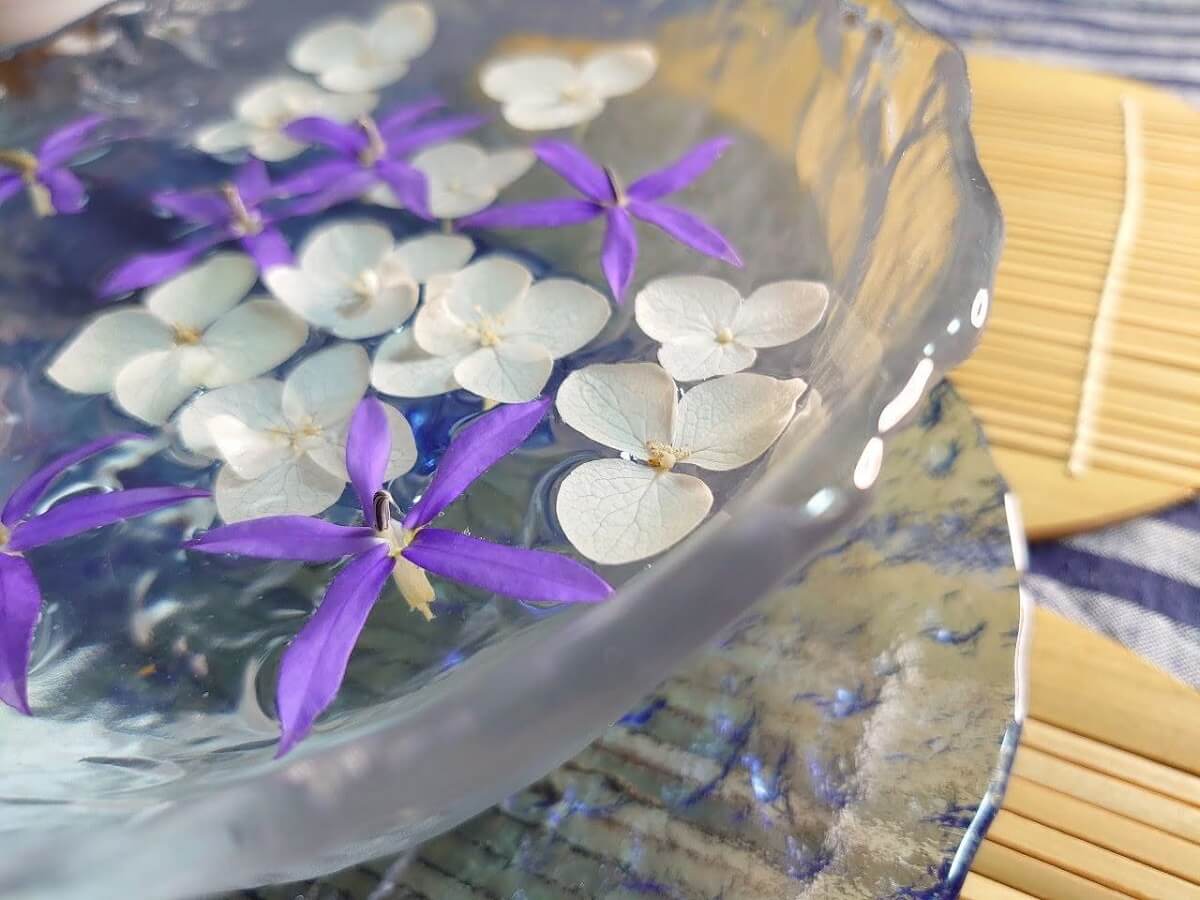 Japanese people have lived with the heat in summer since the old days.

Our ancestors have always thought about how to live close to nature, and in the summer, that is to endure the heat and humidity. They didn’t have any technology and convenient appliances back then. However, Japanese people have always had rich senses and sensibility. Did you know that you can feel cooler just by listening to the sound of something? Do you believe that you can feel cooler just by seeing something?

When you learn from the ancestors’ wisdom, you understand that those are the ways that are kind to our body and heart. We can surely live very comfortably by turning on the air conditioner. However, that’s a kind of life without using our senses but with an “efficiency” first. Would you try a Japanese traditional way  to  enjoy the cool air in summer? Here are some tips you can try during such a hot summer anywhere you are.

Using your own five senses

Everyone knows how to get comfortable in summer. Turning on the air conditioner is the best. That’s true! However, it simply decreases the temperature in your room, and that’s all.

The traditional Japanese way, which has been passed on from the Edo period, is completely different from that. It is, to fully use your five senses such as seeing something cool and hearing the cool sound. We can also feel cooler by surrounding ourselves with things that look nice and cool in color, or by wearing clothing with a creamy-smooth texture and dry touch. By using your five senses like this, we will be adjusting and altering these senses to be able to enjoy the heat in a way that you weren’t able to do before. Your senses will become sharper and sharper, and you will be able to live your life with the fullness of your senses.

Of course, the modern urban concrete jungle is hotter than the Edo Period. Our environment has dramatically changed. So I suggest you pick up some ideas that you think you could try in my article.

Uchimizu is an old Japanese custom of sprinkling water in streets and gardens. It has a good effect on lowering the temperature around the area through water evaporation. It also has an implication of purifying the entrance area for welcoming guests and has an effect of settling the dust on the street. You will also feel the cool air when you see the wet street. It’s one of the Japanese Omotenashi spirits.

Speaking of a feature of summer that is traditional, one of the first things that comes to Japanese people’s minds is “Furin” (風鈴), which literally means a wind bell. A Furin is a small bell made of metal, glass, or porcelain that is hung  at the edge of a roof, and it rings from the wind. In Japan, people believed that energy inhabited the sound. People in Japan hang wind-bells from the edge of their house’s eaves in summer because it was once used as a charm against evil spirits coming from the outside .

In the Edo period, glass products became reasonably priced for common people. Then glass Furin spread with a cool sound and appearance. And it was used also as an amulet. There is also a colorful strip of paper called tanzaku that hangs from the bell’s clapper. Sometimes people also wrote a Japanese poem called Haiku on it to enjoy . Every time wind blows, Furin rings with the sound “chirin chirin (ちりん ちりん).” It’s a really light and comfortable sound. How strange we can feel cooler just by hearing that sound. Through these experiences and wisdom, Japanese people have been able to enjoy the hot summer and feel the coolness with their senses.

Personally, I like a Furin made of Nambu iron.

It is said that Uchiwa(うちわ), a hand-fan, came from China in the mid-3rd century. In China, it was used as a symbol of a high-ranking authority, like an empress. It was made of wood in those days, so it was too heavy to be used as a handheld fan. Later, it was redesigned  as a more useful, light, and rugged one using bamboo and Japanese paper in the Muromachi period, and then spread to common people.

This was how Uchiwa became what it is today. Uchiwa has had tons of designs from simple ones to artistic ones. For example, some of them have  “Haiku 俳句” and “Waka 和歌 ( Japanese traditional poem)” written, or “Ukiyoe 浮世絵 (Japanese traditional woodblock painting)” printed. It’s very useful to fan yourself with it and to make a comfortable space. Some people enjoy decorating a nice and beautiful Uchiwa on their own .

In the meantime ,  another type of hand fan, Sensu”扇子”, was actually born in Kyoto in the beginning of the Heian period. It was used as a decoration called “Ougi 扇” or “Hiougi 檜扇.” At first, only high ranked people could use it as well, but after that it has been used for performing art or tea ceremonies. Gradually,  it has spread to common people. Sensu, was born in Japan and later introduced from China to Europe, and today it has spread internationally.

Let’s try turning off the AC. Sit beside the window,  fan yourself with your favorite Uchiwa or Sensu while listening to the sound of Furin – It’s  a very comfortable moment that makes you feel relaxed and rich. I’m sure you can forget your busy day for a moment.

Sudare is a type of blind curtain, made of thin split bamboo fastened together with thread.

In summer, we hang it from the windows to keep out direct sunlight while being able to take in fresh air because Sudare doesn’t absorb heat. The Sudare’s design can also keep cool air inside. It looks cool and refreshing, and is sold at a very reasonable price. Besides, it’s more useful than curtains to keep the inside out of sight from the outside.

You can roll it up and keep it at your favorite and useful length. You can hang it as curtains or divide your room with it. It’s a very handy item, isn’t it?

I recommend making green curtains outside with some volubile plants, balloon plants or morning glory if you like and can do it.

You can feel relaxed and refreshed.

Every summer, what always comes up to make people chilly are Japanese ghost stories called “Kaidan.”

Kaidan caught on with common people in the middle of the Edo period. People certainly get a thrill  whenever they listen to scary stories. But I wonder why  people want to listen to such ghost stories to get or feel coolness?  Honestly, I’m really scared. It’s not my thing.

It’s really useful and handy in summer. When you sweat, only wiping it off with this makes you feel cooler.

ポータブル扇風機首掛け a portable fan hung around the neck.

There are few types of portable fans in Japan. I highly recommend a portable fan hanging around the neck. You don’t need to hold it, and you can set the direction of the wind flexibly. And it can charge with a USB cable. I gave one to my father while he was farming. Now it’s his favorite fan.

There are many other Japanese ways to enjoy summer. Yukata kimono, fireworks, seasonal foods, events, all of them have survived the hot Japanese summer as necessary things. All of them gave fuel to our five senses and made us able to fully use those senses. Traditionally, Japanese people are used to actively using these senses. Accepting summer heat is one of life’s pleasures. I hope you pick up at least one of the ways I introduced you today and give it a try this summer.  You may be able to experience another summer that you’ve never had before . Enjoy summer!!