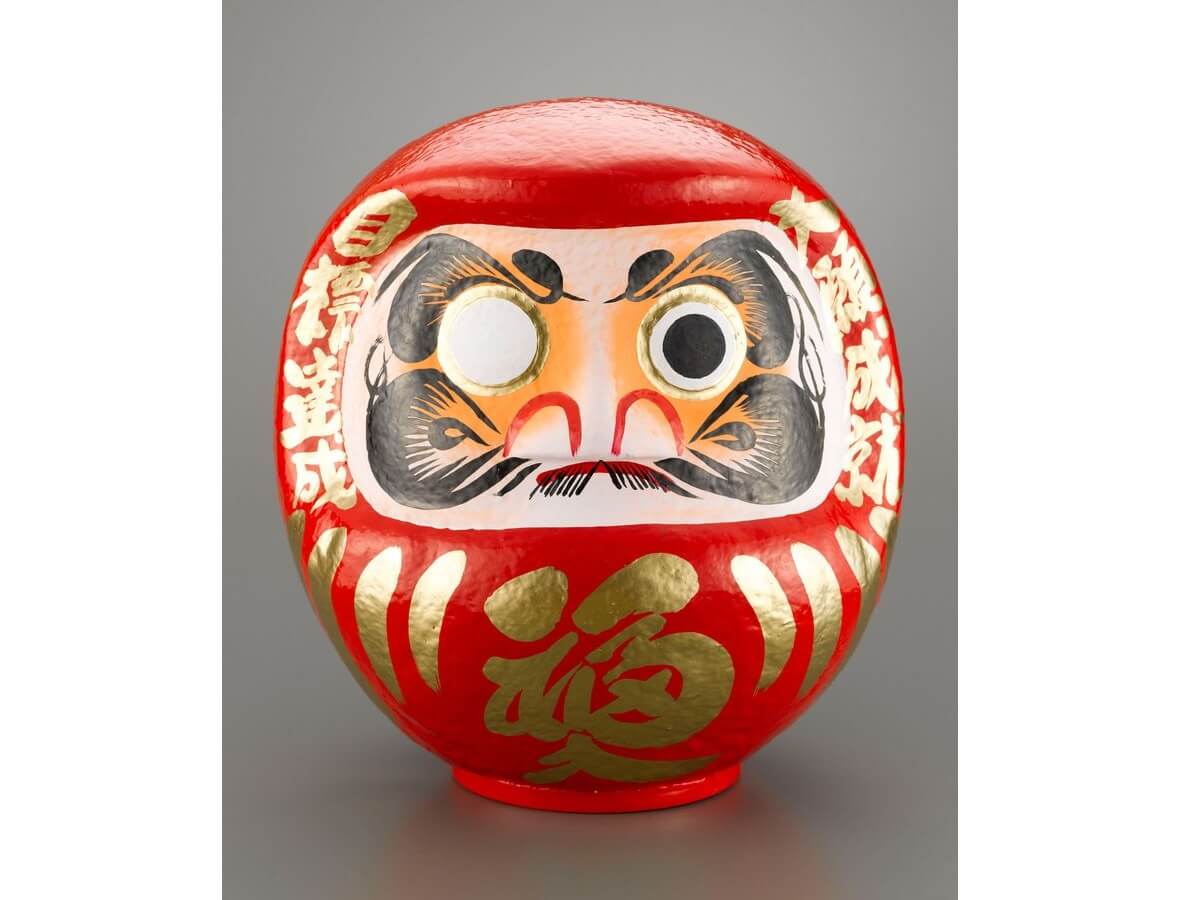 Do you know what this is?  It is called “daruma.”  Daruma looks scary, but this red doll is very familiar to Japanese people, from little children to adults.  Why is it so familiar?  Let me explain how daruma is involved in our daily lives.

As a lucky item

Daruma dolls are treated as things that bring luck.  Daruma dolls are sold with white eyes. When you get a daruma, paint the left eye and make a wish.  Then paint the other eye when the wish comes true.  This custom has continued since around 1800 in the late Edo Period.

Daruma dolls are also similar to roly-poly-toys­­.  Even if they are pushed over, again and again, they spring back immediately to the upright position.  This indomitable spirit is also valued in business as a way of achieving prosperity.

In fact, daruma has a model.  The person is not Japanese but Indian.  Let me introduce him to you.  Daruma (達磨) is the founder of the Zen sect, also known as Daruma Daishi (達磨大師).  He was from the southern part of India but went to China and established the Zen sect.  It is said that he had been sitting in Zen meditation (座禅 zazen) facing the wall for 9 years, and his arms and legs ended up rotting off.  That’s why daruma dolls have no limbs, and his scary face represents how he endured suffering during his training.  It is kind of scary, isn’t it?  I think most people don’t know about it.  The phrase “fall seven times, stand up eight (七転び八起き)” was born from the fortitude of Daruma Daishi.

But now, daruma dolls are called “daruma–san” in a friendly way and have become popular among children.  It seems funny for them to see a daruma with a scary face getting up even if it is knocked down and knocked down again.

This is a traditional wooden toy made of stacked blocks.  It is very easy to play but difficult to complete.  You have to hit the side of the block quickly with a gavel, starting from the bottom block.  You remove each block one by one until, in the end, the top daruma remains safe.  If the daruma on top falls down, you will fail.  This game is simple and lots of fun.  In this game, the daruma doesn’t get up in case it falls down.  Therefore, you must try hard not to knock down the daruma.

“Niramekko” is a staring game.

In starting the game, they call out, “Daruma-san Daruma-san.” This is a short chant that every Japanese person knows.  Here are the entire lyrics below (It slightly varies from region to region).

Saying the last word “pooh,” each of them makes a funny face. The one who laughs first is the loser.

It seems like there are similar games in other countries.  But why does Daruma appear in this chant in Japan?  That’s because Daruma was a very great monk and he never laughed while practicing zazen, no matter what.  So, Daruma was chosen in the rhyme as an opponent to fight in the battle.

I’d like to introduce another popular game among children.  There also seem to be similar games in different countries.  They are “Redlight, Greenlight” in the U.S. or “Grandmother’s Footsteps” in the U.K.  The rules differ between countries and even differ between regions, but the basic rules are very similar.  I’ll introduce the rules in Japan. Firstly, one of the children becomes “it” and turns away from the other children and chants “Daruma-san ga koronda.” Then while chanting, the other children approach “it.”  If “it” turns around, the children must freeze.  If they don’t freeze, they must join hands with “it,” making a chain of children.  Finally, the person who tags “it” can cut the chain and free the children.

Why did the chant come to be “da ru ma sa n ga ko ro n da?”  It means Daruma falls down, but the number of characters is the key, not the words.  It has exactly ten characters.  This is an alternative to counting to ten.  When a small child counts from 1 to 10, it’s easier to say the phrase than a number.  Interestingly, there are some other ten-character phrases in games from different regions.

Do you understand how “Daruma” is involved in our lives so far?  Lastly, I’d like to introduce some picture books.  In these books, “Daruma” is depicted as a cute character. It doesn’t have a scary face any more.  “Daruma” is loved by children.

This picture book Daruma-san ga no doubt attracts babies’ attention. It was published in 2008. There are three books in the series.  Each of them starts with “daruma-san.” In this book, Daruma is depicted cutely and comically.  He not only falls down but stretches, deflates, and even farts.  This book consists of the repeated phrase “daruma-san” and onomatopoeia.    Every time you turn the page, the cute daruma will make the children laugh out loud.  You can enjoy the rocking daruma and the sounds of words.  I highly recommend reading and sharing it with toddlers.

This is another picture book, Daruma-chan and Tengu-chan.  This has become a best-selling book since it was first published in 1967.  In this picture book, Daruma-chan is depicted as a little boy in his family.  Tengu-chan is his friend.  “Tengu” is also one of the classic Japanese characters. The author, Satoshi Kako, wanted to use traditional characters in a modern context.  This is the first in an eleven-book series.  Some of them have English versions.  All the Little Daruma books are filled with fantastic images, amazing events, and memorable characters.  Little Daruma is one of Japan’s best-loved children’s book characters.

Thank you for reading my article.  Children nowadays tend to be obsessed with video or mobile phone games.  I’d like to encourage appreciation for old toys, games, or characters and pass them on to the next generation.

“Tengu” is a half-man, half-bird creature from Japanese folklore.  It might be interesting to find out where it came from in detail.