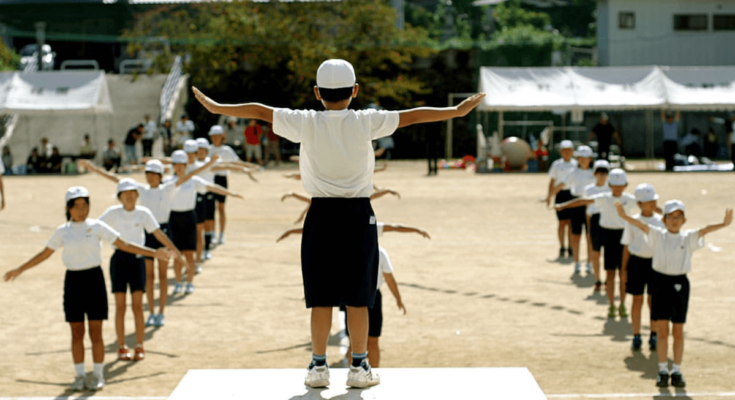 I can say that Radio Exercise or “Rajio Taisou” (ラジオ体操 )  is one of the characteristic parts of Japanese culture. It is one of the common features of summer in Japan. It’s not too much to say that Japanese, young and old, know about calisthenics to radio music and can do it. Our bodies move naturally if we hear the theme song and piano sound.

This calisthenic program is a 10-minute exercise program that is broadcast on NHK, (Nihon Housou Kyoukai) Japan public broadcasting station, guiding warm-up exercises along with piano music. It was designed for anyone at any age to do by themselves and there is also a version that allows us to do it while seated, so everyone from children to the elderly can join in. It is noted as a simple and effective exercise that uses the muscles of the whole body with simple motions.

It was originally made and broadcasted in 1928 for the purpose of improving the health and physical fitness of the general public in Japan. Actually, it was established in the U.S. by the Metropolitan Life Insurance Company, and Japan referenced that and made a Japanese version. Ever since then, this tradition of Radio Exercise has been incorporated into a lot of Japanese people’s routines.

When the war began in 1937, the Rajio Taisou was called “National Group Calisthenics.” The national government noticed that doing all of the same movements in sequence flowing along with the radio had the effect of giving the participants a shared feeling of unity. It meant that Rajio Taisou made them become one, letting people’s minds and bodies be citizens who were responsible for the war. It was held all over the country at the same time by radio. Calisthenics to the radio became an important activity to mobilize the national spirit for the war.

In 1945, due to the deterioration of the war situation, it was difficult to broadcast but it should be noted that radio continued to be broadcast three times a day up until just one day before the declaration of defeat.

As postwar reconstruction progressed, people hoped for the revival of radio exercise and a new version was devised. The first version was re-edited after World War Ⅱ, but this second version was too difficult for everyone to spread. So, the third version of today was established in 1951 and has been used continuously for the last 70 years. The theme song was written in that year but they didn’t use piano music at that time.

This Rajio Taisou spread especially through the country in the 1960s and 1980s. A lot of people would often join it during summer vacation. Primary school students gathered for the activity at the small park or the school in the neighborhood at 6:30am.

These exercise habits have been continuing since a few decades ago. Compared to the old days, the proportion of communities and children doing them is decreasing, especially in urban areas. However, it has still been going on in various parts of Japan, and it’s been posted on YouTube lately as well. Like Ueno Park in Tokyo, Osaka jo-castle park in Osaka, Kamogawa river bank in Kyoto, and so on. It is also held for adults by local volunteers for the purpose of doing exercise and creating community spirit within the neighborhood.

Basically, students in many schools do exercise in their physical education class as a warm-up. We might also learn it in physical education classes when we are kids. Some companies hold those exercises for employees at work places with the aim of preventing injuries, raising their motivation and having group consciousness and so on.

What kind of contents do the exercises have?

The entire exercise program is divided into two sections including 13 different motions in each section for approximately 3 minutes. The first section aims to improve physical strength regardless of age. It is called the Radio Exercise part one or “Rajio Taisou Dai ichi.” (ラジオ体操第１) The second half targets a younger generation, mainly for the purpose of training muscles and is called the Radio Exercise part two or “Rajio Taisou Dai ni.” (ラジオ体操第２)

These are the standard 13 motions in part one.

1.    Rotate and stretch your arms

Raise your arms up from forward, stretch your back and down your arms from your side.

2.    Cross and spread your arms while bending your legs up and down

Swing your arms and bend your knees.

Swing your arms in full circles to the outside then inside.

Spread your legs to the left, shoulder wide, and swing your arms then stretch your chest with an inward breath.

Bend sideways with one arm up, over head, stretch your side from the right side twice, then the left side.

Bend forward to touch the ground 3 times and bounce with hands on your waist and backbend.

7.    Twist your body from left to right

Swing your arms and twist your body, to left then to right.

Hands on your shoulders with your legs spread to the left, stretch up then down.

9.    Bend your body diagonally downwards and chest out

Bend at the waist for your right toe twice then up and open your arms, stretch your chest then  down for the left.

Make a circle your upper body one way, then the other way.

Hop on both feet up 4 times, then spread and close your legs twice.

12. Spread your arms then bend and stretch your legs

Control your breath, take deep breaths in and out with your arms going up and  down.

So now, I think you are ready to do the Rajio Taisou, right ? Let’s just mimic every motion! You also can check out the videos in Japanese uploaded on NHK’s official YouTube channel here, Part 1 and Part 2.

Additionally, I found a helpful YouTube channel to learn this exercise by Japanese construction company, Tokyu Kensetsu. It’s pretty usual for employees at construction companies,or freight companies to do this kind of exercise as a warm-up at the beginning of their shift. They said on the top page,

“Aiming to eradicate occupational accidents in the construction industry, and to revitalize communication between diverse people working on construction sites. In the future, we think that creating an atmosphere where people can easily talk to each other at construction sites where diverse workers are increasingly mixed is the first step in reducing disasters. Please use the radio exercise at the beginning of the business as a chance to activate people’s communication.”

So, you may see how those exercises are held at some workplaces in Japan from this English-version video. Please let me know what you think of our funny habits.

For your information, if you are in Japan, you can watch or listen to the programs on the NHK official channels below. Radio app “rajiru rajiru” (らじるらじる) NHK is available in Japan. https://apps.apple.com/jp/app/id473937342 (Japanese only)

When I was a kid, I used to feel joy at the stamps that accumulated on the card, or feel something like guilt if I didn’t get  stamps for the rest.

An attendance sheet was often handed out by the school or community where you live. It’s also available at every post office or their website that is a main sponsor for Rajio Taisou. Please enjoy it on your own!

The Rajio Taisou was such an easy exercise that a lot of people who had to stay at home participated again during the pandemic in 2020. Apparently, about 10kcal was burned in 3 minutes and 11 seconds of the Radio Exercise part one exercise. If you‘re stuck in a rut by working from home and you need a change of pace, the Rajio Taisou must be a good idea.