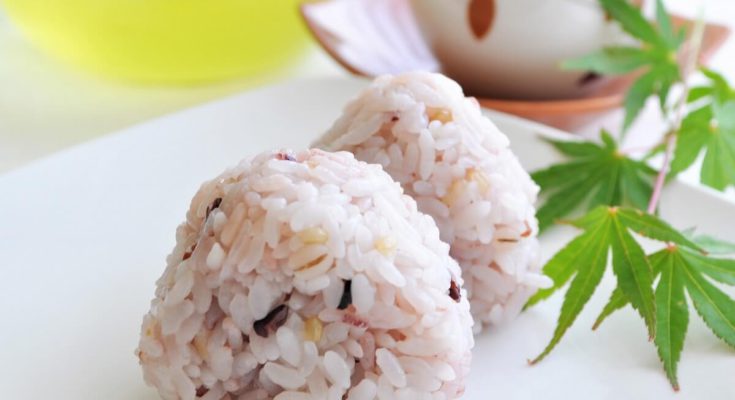 Hi everyone!  What do you think this is?

It’s a Japanese comfort food, called onigiri. Today, I’d like to introduce onigiri, or rice balls, to the world. I don’t think it’s too much to say onigiri is a part of Japanese life, like the hamburger in the US, the sandwich in the UK, or the taco in Mexico.

Onigiri, also known as omusubi or rice ball, is usually made from lightly salted white rice formed into triangular or cylindrical shapes, and often wrapped in a sheet of dried seaweed. Typically, we put some pickled plum, dried bonito flakes, or salted salmon in it. It’s sometimes made from seasoned rice mixed with seafood or vegetables. There are many kinds of seasoning for onigiri in Japanese grocery stores.

If you’re not familiar with and not comfortable with eating seaweed, a seasoned one is a good choice, I think.

How Close Onigiri Is to Our Lives

Onigiri is very convenient to eat by hand and take outside with us, so mothers and grandmothers in Japanese families make it on many occasions like family picnics, community events, or just for a quick lunch. Onigiri reminds us of our childhood. The shape or ingredients vary from mother to mother, or family to family. For example, my mother’s hands are small and she can’t make triangular ones. Her onigiri are always ovular. When I went on school picnics in elementary school, I was jealous of other kids’ triangular onigiri. So I sometimes asked my friend to exchange with me, but you know, they didn’t taste very different. Anyway, eating onigiri with friends outside is really fun. Onigiri has been loved by Japanese people for a long time.

Now I’m going to tell you about the history of onigiri. My story may become a bit boring, but bear with me for a while. Do you know when the history of onigiri started? It dates back to prehistory. “Japan’s oldest rice ball” was discovered at the “Chanobatake Ruins” in Ishikawa Prefecture, a site in the late Yayoi period, which is around the 4th century BC.

In the Heian period, which lasted from the 8th to 12th century, onigiri was called Tonjiki and it was served at feasts in court. It is said that it was also used as portable food for soldiers such as guards.

Since the Edo period, from the 17th to 19th century, onigiri became useful as a takeout lunch. Travelers used it as a carry-on meal, and farmers ate it during farm work. During the Edo period, the cultivation of Asakusa Nori seaweed started and seaweed-wrapped onigiri became popular because seaweed is nutritious and it prevents our hands from getting rice grains stuck to them.

And now, we have so many kinds of onigiri at convenience stores. A specially designed plastic film wraps the onigiri and seaweed separately, so we can enjoy the crispness of the seaweed sheet when it’s time to eat.

By now you probably have a better idea of how close onigiri is to our lives. It’s such a common food that we have many folk tales featuring onigiri. Almost all Japanese kids know these stories.

Onigiri also varies from place to place. For example, butter flavored onigiri in Hokkaido, seasoned seaweed-wrapped onigiri in the Kansai region, or onigiri with soy sauce flavored clams in the Tokai region. Why don’t you take a look at the shelves at convenience stores when you visit Japan?

When We Eat Onigiri?

We eat onigiri on various occasions. For example,

How to Make Onigiri

Onigiri is such a popular dish among us, besides it’s very easy to make. But I’d like to tell you one thing. You need to use glutinous rice like Japonica rice. If not, it would be difficult to form it into the correct shape. Now let me show you how to make it. Originally, we made it with wet and salted hands. But these days, we spread a piece of plastic wrap on our palms to avoid food poisoning. First, put some salted rice on your palm, then put some ingredients on it. And form it into a shape. That’s all. Pretty easy, right?

You can arrange it in your style. You can put some meat in it, mix some curry powder with rice, or how about wrapping it with some lettuce?  I’m sure you’ll come up with your original onigiri quickly. I hope you like it. Thank you for reading.