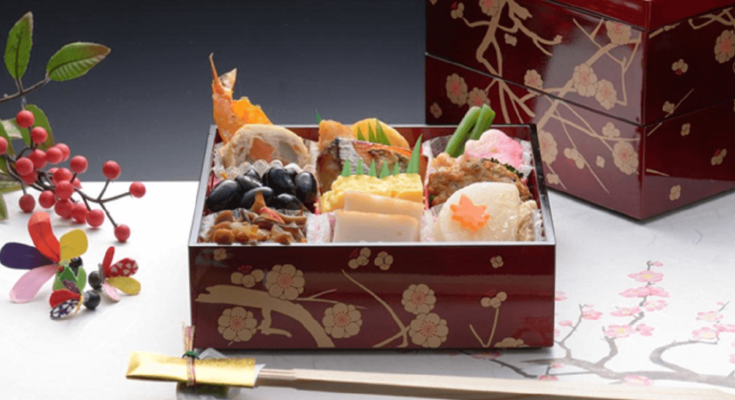 In Japan, we celebrate various events throughout the year.  For each event, there is a custom to eat a particular food or dish.  It is often a traditional dish that has been around for a long time. One of the most important holidays of the year for Japanese people is New Year’s Day, Oshogatsu（お正月). Today, I would like to talk about the traditional dish eaten on the New Year’s holiday, Osechi-ryori.

Osechi-ryori are Japanese New Year’s dishes that are specially prepared to be eaten during the first three days of the year.  In the old days, all the stores were closed during the New Year’s holiday, and people couldn’t buy food, so they prepared at least three days’ worth of food at the end of the year.  For housewives, these three days were also the days when they could relax with their families because they did not have to cook.

To explain what kind of food it is, it is actually not one dish but many different small dishes packed into tiered boxes called jubako. The important thing to remember is that each dish has its own auspicious meaning that reflects people’s wishes, such as good health, prosperity, and a long life. The New Year period falls on a cold winter day, and in order for food to be preserved for at least three days, a lot of seasonings like soy sauce, vinegar, salt, and sugar are used which give it a strong flavor.

Of course, Osechi is different depending on the region or family.  Let me introduce some of the common items.

Tazukuri is dried-sardine cooked down with sweet cooking sake, sugar, and soy sauce.  Tazukuri literally means to make a rice paddy because sardines were historically used to fertilize rice fields. Therefore, it promises a rich harvest.

Kurikinton are candied chestnuts with mashed sweet potatoes.  They have a gold color, representing money, luck, and prosperity.

Kobumaki is herring or other fish wrapped with kombu, kelp.  Kelp symbolizes joy because kombu is associated with the word yorokobu, which means joyful.

Datemaki is a sweet rolled omelet mixed with fish paste.  It looks like rolled-up scrolls, which were historically used to record knowledge, so you can make progress in learning and enrich your knowledge by eating it.

Kamaboko is a boiled fish cake.  Kou means red and haku means white.  The half-moon-shaped kamaboko represents the first sunrise of the New Year over the horizon.  In Japan, the combination of red and white symbolizes celebration and happiness.

Namasu is made of radish and carrot cut into thin strips and pickled in sweetened vinegar with yuzu (small citrus fruit) flavor.  It also has the auspicious combination of red and white.

Ebi (shrimp) symbolizes a wish for longevity because the curved shape looks like an elderly person.

Nishime are boiled root vegetables such as carrots, burdock, bamboo shoots, lotus roots, and shiitake mushrooms.  Root vegetables grow roots in the soil, so they symbolize long-lasting happiness.  Also, the holes in the lotus roots represent a happy future without obstacles.

These dishes will be beautifully arranged in square lacquer boxes.  We call them jubako（重箱）or oju（お重).  Jubako literally means stacked boxes.  So they symbolize stacking up happiness.  While jubako often consist of three or four tiers, they originally comprised five tiers, where the first four boxes contained food and the fifth was left empty to “pack good fortune.”  Each food item in the jubako was originally fixed, but today it varies greatly depending on the region and the family.

Lacquerware which is called “japan” is one of the oldest traditional crafts in Japan.  Lacquer boxes are carefully completed one by one by craftsmen with sophisticated skills.  The boxes painted in the basic colors of black and vermilion are shiny and beautiful.  It is also common for the outside of the boxes to have beautiful designs on them.  Lacquer boxes are not only light and beautiful but also durable and have a sterilizing effect, making them ideal for food preservation.

Lastly, I would like to introduce another traditional dish that is also essential food for celebrating the New Year.  It is ozoni.  I remember a foreign guy once said to me, “I don’t like osechi because they’re cold.”  That’s true.  So why not try ozoni?  It is a soup with rice cakes and vegetables.  Rice cakes or mochi have been used in rituals and celebratory events in Japan.  Ozoni in particular has a wide variety of ingredients and soup flavors depending on the region.  Please enjoy osechi dishes together with warm ozoni.

My mother made osechi every year.  I used to take it for granted, but in retrospect, it must have been a very hard job to make so many different kinds of food one by one with all her heart.  When I was little, I couldn’t eat many of them, but as I grew older, I came to enjoy all of them.  And now, I make them for my family every year, but it is hard to come close to the taste that my mother made.

These days, more and more families don’t cook osechi because many grocery stores are now open on New Year’s Day, and also just because it’s a hassle.  However, this is a traditional Japanese dish.  Nowadays, you can buy them at department stores. They look gorgeous because they are made by professional chefs.  Also, you can buy each item at a grocery store and pack them by yourself.  I would like to cherish the custom of having a family gathering around osechi on New Year’s Day.