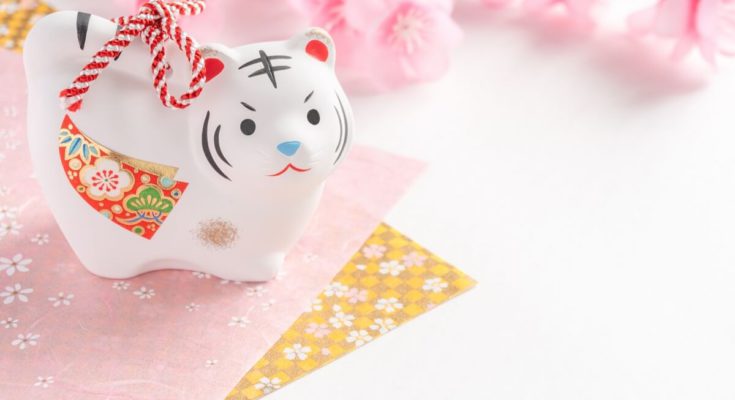 What is Nanso Satomi Hakkenden?

Nanso Satomi Hakkenden is a Japanese epic novel, whose title has been translated as The Eight Dog Chronicles. It’s the story about eight youngsters, The Eight Dog Warriors (八犬士), bound by fate with Princess Fuse (伏姫), a princess of the Satomi Clan, and a god dog Yatsufusa (八房). Each of the eight youngsters was born with a prayer bead, and each of the eight beads has a letter. They are:  Jin(仁, humanity), Gi(義, justice), Rei(礼, courtesy), Chi(智, wisdom), Chu(忠, loyalty), Shin(信, faith), Kou(孝, filial piety), and Tei(悌,respect for one’s elders). The youngsters had the letter “dog(犬)” in their family names, and each bead’s letter in their first names. They got together growing up and served the Satomi Clan to beat the enemy with their eight virtues.

Bakin was inspired by the Chinese novel Water Margin(水滸伝), and he put the ideas of Bushido(武士道), Confucianism, and Buddhist philosophy into his novel. Does putting eight beads together to make a wish remind you of something? Yes! It’s like Dragon Ball in ancient Japan! The novel is so exciting to read.

Jin(仁) means benevolence or humanity. In Japan, Emperor Seiwa was the first Emperor to use this letter in his name, and it has been regarded as one of the important acts of virtue for the Imperial Family. Since then, it is customary to use this letter in almost all the Emperor’s names. There is a Japanese aphorism, “Medicine is a benevolent art.” As a member of the medical industry, I always keep it in mind. Don’t you think that being kind to other people is a very important thing?

Gi(義) means justice or righteousness. It’s the thing you must do. There is an old saying, “To see what is right and not to do it is to lack courage.” It so inspired me that I became a police officer just after I graduated from university. Even though I gave up my career to take care of my kids, I still want to do the right thing.

Rei(礼) means courtesy, etiquette, or gratitude. It originally meant abstract ideas including actions, words, and deeds, clothes and tools to perform ceremonies or rituals. When I was learning Kendo(Japanese fencing), I was taught that “Kendo starts with Rei and ends with Rei.” That means with regard to the spirit and style of martial arts such as Kendo, the most important thing is to observe the rules of etiquette and show respect to the opponent. You might have seen Japanese athletes start their performance with bowing and end it with bowing in sports events like the Olympic Games or the World Cup Games. That’s Rei.

Chi(智) means wisdom, knowledge or intelligence. It’s the ability to understand the reason for things and judge right from wrong. Many people have images of Chi(智) that are “clever,”“intellectual,” or “intelligent”. So it has been used for names since ancient times. For example, the name of the Empress Emerita Michiko(美智子) means a beautiful(美) and intellectual(智) child(子).

Chu(忠) means loyalty or devotion. It’s the act of performing duties responsibly or the act of serving a nation or a lord with all one’s heart. In Bushido, it’s the most important and frequently emphasized virtue. Have you ever watched the movie “Hachi : A Dog’s Tale”? It’s based on a true story about a loyal dog and his owner. It’s said that Hachi went to meet his owner at Shibuya Station every evening even after his owner’s death. Hachi’s loyalty was so praised among Japanese people that his bronze statue was erected in front of Shibuya station. Because of my belief In Chu, I devoted myself to public safety as a police officer and I’m devoting myself to rehabilitating patients as a physical therapist now.

Shin(信) means belief, trust, or honesty. There’s an old saying, “Those who believe shall be saved.” I think it has a lot of meanings to it. If you’re a religious person, believing in God is the most important thing. Trustworthiness is one of the most important traits in human relations. Also, believing in yourself is indispensable to achieve your goal. I’m sure it’s necessary to believe in others and to be the one who is believed in.

Kou(孝) means filial piety or respect for one’s parents. There’s an old saying, “When one is filial, one’s parents are gone.” or “A son never thinks of his parents until it’s too late.” People often regret that they weren’t filial enough to their parents while they were alive. People tend to take it for granted that their parents take good care of them, and it happens that it’s too late when they get old enough to realize how much they owe their parents. I live with my elderly parents, and I myself feel I lack gratitude for them. But recently, I’m thinking about taking more time to take good care of them.

Tei(悌) means respect for one’s elders or harmony among siblings. In the old days, seniority was strictly kept even among families. I don’t fully understand this concept because I’m an only child, but I think it’s necessary to keep good order in the family.

What do you think about those eight virtues? Nanso Satomi Hakkenden was a very interesting story, and I was so impressed by those virtues that I’ve kept them in mind since then. Thank you for taking the time to read my story.

One Comment on “The 8 Japanese Virtues From My Perspective”