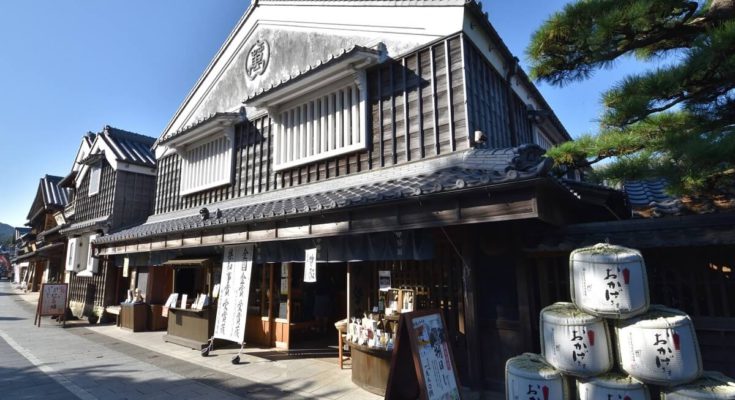 Have you ever been to Ise, or have you ever heard of it? Ise is a coastal city in the middle of Mie Prefecture. I’ve never lived there, but I’ve often visited because it’s my late husband’s hometown. Ise is well known for its shrines (Ise Jingu, 伊勢神宮) which are Japan’s most sacred Shinto shrines. The Ise Shrines consist of two major shrines, the Inner Shrine (Naiku, 内宮) and the Outer Shrine (Geku, 外宮), and over a hundred smaller shrines spread across the region. During the Edo period, which is from the beginning of the 17th century through the 19th century, worship at the Ise Shrines became very popular among ordinary people. Thanks to prosperous tourism, a variety of foods emerged for convenience and as souvenirs. Now those foods have turned into soul food for the people of Ise. Today I’d like to introduce some of them to you. If you have a chance to visit the Ise Shrines, why don’t you look for and try some?

If you’ve ever tried typical udon noodles, you may be surprised when you see Ise udon. It’s not soupy at all, but instead it is drizzled with a little bit of sweet and thick soy sauce. The noodle itself is quite thick and soft. Why is it so different from ordinary udon? That’s because the shops had to deal with a bunch of customers who were worshippers at the Ise Shrines. During the Edo period, the practice of visiting the Ise Shrines became widespread, with no less than 4 million people visiting annually (about ⅙ of the population at the time).

The noodle needed to be boiled and boiled continuously to be served to worshippers immediately, and the soup was decreased and made into thick sauce to be served easily and eaten quickly. Because of its convenience, Ise udon gradually became soul food for the locals. The noodles and the sauce are available at the local groceries. All you have to do is to boil and drain the noodles and pour the sauce on a bowl of noodles. You can put some chopped green onion or anything on top of it if you like. It’s surely the best quick meal for Ise people.

This sushi is made by marinating bonito or tuna sashimi in a sauce made with soy sauce and sake and mixing it with vinegared rice. Tekone literally means “to mix with fingers.” It is said that the dish started when fishermen were busy with bonito fishing. They used to mix vinegared rice with chopped bonito and seasonings with their fIngers to make an easy meal. It’s really easy to cook, but it happens that sashimi is expensive. In that case, you can buy it at the grocery store.

Would you like to try some? You can find a set of dishes of Tekone zushi and Ise udon at the local restaurant.

Arare is a bite-sized rice cracker, and chazuke (also known as ochazuke) is a simple dish made by pouring green tea, dashi, or just hot water over cooked rice. So what is the combination of arare and chazuke like? Can you imagine? Ise locals eat arare not as a snack but a quick meal when they become a little bit hungry. For example, kids after school who are hungry and can’t wait until dinner often eat it. But how? It’s very simple. Put some arare in a bowl and pour some hot green tea or water, that’s all. You can find salty arare, brown sugar-flavored arare, or other flavored ones at the grocery store. It’s like savory cereal.

A classic snack from Ise is Pan-ju. It is a hidden local confectionery combining pan (pastry) and manju (bun with filling). The round takoyaki-like look is cute and popular. The ones I bought had the fillings of coarse red bean paste, strained red bean paste, purple sweet potato paste, green tea paste, chestnut paste, and the most delicious apple custard cream! My late husband told me that pan-ju was one of the most popular snacks among his friends in his high school days.

Shell Leines is a shell-shaped madeleine made by a local confectionery company. In my opinion, it’s hands down the most delicious madeleine! The outside is crispy and the inside is moist. The taste is so rich and, moreover, it contains pearl shell powder, which is said to be good for your skin. Are you interested in Shell Leine? You can get it at the local grocery store or online!

Akafuku mochi is the most famous and popular souvenir of worshippers at the Ise Shrines. It’s a rice cake confectionery wrapped with strained red bean paste which has three lines representing the flow of the Isuzu River. Actually, it’s more like a souvenir than soul food, but it’s so famous for Ise that I decided to mention it here. You can buy it at the major JR stations in the central and Kansai regions, at the Kintetsu Railway stations, service areas along the highways, or limited stores.

Ise is not a big city, but thanks to the existence of the Ise Shrines, it’s one of the sightseers’ must-see venues. The vigorous tourism during the Edo Period brought many kinds of quick foods. Even Japanese people may not know those foods, I imagine.

4 Comments on “Soul Food for the People of Ise”