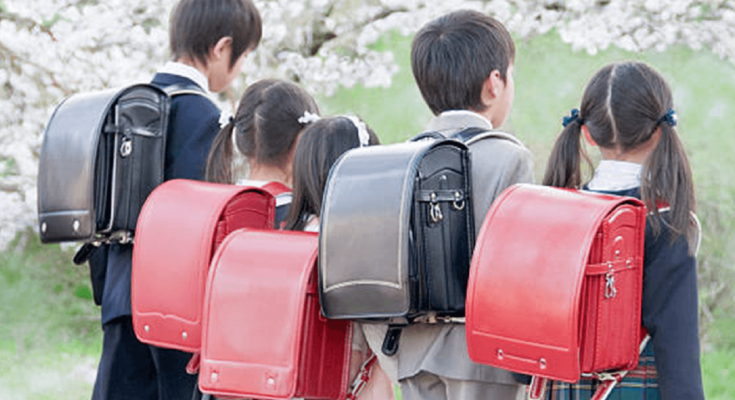 Have you ever heard of randoseru? Randoseru is a Japanese backpack for elementary school students. If you have ever lived in Japan, you may have seen elementary school students going to and from school with box-shaped backpacks on their backs.  These backpacks are somehow becoming popular among adults abroad. They try to get them as souvenirs or use them for themselves.  How did this trend come about?

It appears that Japanese anime has a great influence on this trend. Japanese anime is now well-known all over the world. You can see school kids carrying this randoseru in some of these shows. Detective Conan and Doraemon are famous, aren’t they?  Another reason is that a photo of a Hollywood actress carrying a bright red randoseru in New York in 2014 went viral around the world.  Now I’d like to dive into the history of randoseru.

The word randoseru is from the Dutch word, ransel. It dates back to the late Edo period, when Japan had a relationship with the Netherlands. The Japanese Army adopted the cloth bags that Dutch soldiers carried on their backs.

Later, this type of school bag gradually spread over Japan, and it became a necessity for elementary school students after 1955. At that time, these randoseru were made of leather and weighed 1,600 grams. Later, synthetic leather products came to the market, and their size was tailored to fit usual school materials.

In the past, randoseru were black for boys and red for girls. This stereotype persisted for a long time, even after one of the major manufacturers released randoseru in 24 different colors in 2001. However, gradually, different colors like pink and orange began to catch girls’ attention. On the other hand, boys still prefer black or dark-colored ones. Also, stylish ones trimmed in a different color are appealing to them as well. In any case, I feel the times have changed a lot because children can choose their favorite colors.

With the great efforts of manufacturers, the quality of randoseru is getting better and better. It goes without saying that first-rate randoseru are now one of Japan’s outstanding arts and crafts, making professional craftsmen more dedicated to their work than ever.

Currently, many of the randoseru are made of artificial leather called “Clarino,” with the exception of the high-end leather products. The reason artificial leather has gained such popularity is that it is soft and supple, yet durable and rainproof. It is lighter and less expensive than genuine leather. In addition, since artificial leather is quite easy to process, it became possible to customize these bags, work on fine details, and make them easy for children to use. Nearly all of these randoseru are handmade and come with a six-year guarantee. They are sturdy enough to last for the duration of elementary school without any problems, no matter how carelessly children handle them.

In this way, although the basic structure of the randoseru has not drastically changed, its appearance and value are gradually changing. Are you becoming interested in randoseru? Next, I would like to talk about the traditional Japanese way of preparing for entering school.

School starts in April in Japan. In order to enter elementary school, a child must be six years old as of April 2. Starting school is a significant event for both children and their parents. Most children put their textbooks and notebooks in their randoseru bags and walk to school on their own. This might be their first step away from their parents. Randoseru is one of the most important items along with stationery when preparing for elementary school. The most popular randoseru are sold out even a year in advance. Another important item is a desk. Both items are usually gifts from grandparents, who are willing to pay a lot of money for their grandkids. According to the survey, the average price of randoseru in 2021 was about 55,000 yen. Study desks come in all shapes and sizes, so they vary in price depending on their features and quality. Families tend to choose a desk that fits their own needs and household budget. They are usually wooden desks that include bookshelves, drawers, and a special hook or place for randoseru bags. Children must be happy to have their own studying corner and get motivated to start school.

What do you think happens to a randoseru bag after six years of use? These school bags are filled with memories of experiences and growth. As I mentioned, randoseru are so sturdy that even after six years of use, they remain in good shape. However, it is a bit weird for people other than elementary school students to carry them in Japan.

Instead of getting rid of their school bags, some people keep them as precious reminders of their youth, while others pass them down to younger generations. There are some interesting projects in which Japanese people send their school bags to children in developing countries. Even though these donations often include shipping and other costs, children can feel a great sense of spiritual fulfillment by being able to help someone.

Another effective way to reuse school bags is to remake them into something else. Some companies offer the service of remaking randoseru into practical things like wallets, pass holders, or a very cute miniature version of randoseru.

As I looked into randoseru bags, I was surprised to find out their long history and their great advantages.  I learned that randoseru bags can serve to protect children in case of an accident or disaster. The thickness of the bags can serve as a cushion and it can protect children from hitting their heads when they fall. When earthquakes happen, children can also place their bags on their heads to protect themselves.  Furthermore, randoseru bags can float in water and serve as a float in case of water-related accidents. It makes sense that lots of people choose these school bags for their children even though it isn’t mandatory to do so.

I hope this article will help you better understand this unique aspect of Japanese culture.