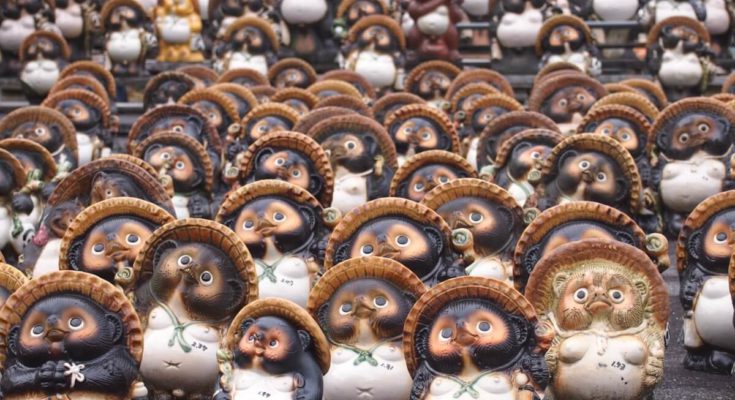 What do you imagine when you think of Japanese souvenirs?

In this article, I’d like to introduce Japanese souvenirs from a Japanese perspective.

These souvenirs are really famous in Japan and also cute. These are considered good luck.

Kiborinokuma is a wood carving bear. It’s a famous Hokkaido souvenir. It started to be made at Yakumo-Cho in Hokkaido, which Tokugawa Yoshichika governed at that time. He found some wood carving bear at Bern in Switzerland while traveling around Europe from 1921 to 1922. He also knew that its farmers sell it in their off-season. Since he had been thinking that he should do something for poor Yakumo-Cho, he decided to make and sell it like Bern. Since then, it’s become a famous and popular souvenir of Hokkaido.

Kokeshi is a wooden Japanese doll. It started as souvenirs of places famous for hot springs in the Tohoku region in the late Edo period. It’s considered that “kijishi,” who was lumbering trees and making dishes with them, started to make it as souvenirs for children. There are many kinds of kokeshi, depending on the area.

Okiagari Koboshi is a small craft that gets up when it falls. It’s considered good luck because, in Japan, there is a four-character-idiom called “shichitenhakki” (七転八起), which means that how many times you fall, get up and keep doing. It’s been made for over 400 years at Aizu in Fukushima.  “Okiagari” means getting up, and “Koboshi” means a child.  The lord of Aizu had the feudal retainers  start making them as their side job during the wintertime in the early Edo period, and that’s how Okiagari Koboshi originated!

This is also from Aizu. Akabeko is a cow-shaped craft whose neck moves when you touch it. There are various theories, but it had been familiar to people as a charm for children yet in the Edo period. “Beko” means a cow in the Aizu dialect. Red was considered as the color that can drive demons that obsess people and cause disease away in the old days. These spots on its skin are expressed as smallpox. It’s considered that they’re drawn as substitutions for young children to save from smallpox which was the disease that caused death in the past.

Sarubobo is a doll that has been being made at Hidatakayama in Gifu for a very long time. “Bobo” means a baby in the Hida dialect, and since they look like a monkey (“Saru” in Japanese), they’re called Sarubobo. Mothers and grandmothers had been making it for their daughters and granddaughters. It was made with red cloth to protect from infections like smallpox, and this cloth represents the person who owns it. That’s why it has no face.

Shigarakiyaki is a type of pottery mainly made at Shigaraki-Cho in Shiga. Raccoon dog-shaped pottery is the most famous. One day, Fujiwara Tetsuzou came across a scene of raccoon dogs drumming their belly at the riverside in Kyoto. Afterward, he knew that the incident happened only once in a blue moon. Then he came up with the idea to reenact the scene in pottery. After he went back to Shigaraki-Cho, he started to make it. In 1951, it was displayed with the flag of Japan that made it hold along the road when the Showa emperor visited there. Since then, it’s become a famous souvenir of Shiga.

“Shisa” means lion. It’s the guardian deity in Okinawa that drives demons and disasters away. You can see it everywhere in Okinawa. Its origin starts from Ancient Egypt. First, the sphinx had come to China as “shishi” from Ancient Egypt. Then, sometime between the thirteenth and fifteenth centuries, it came to Japan. “Shishi” means a lion in China, but there were no lions in Asia at that time. Therefore, the shape of the Shisa changed over many years because many people in Japan had never seen a lion, and were imagining them and putting their own spin on them.

A Thing that is famous at Miyajima in Hiroshima is “shamoji.” Shamoji is a tool you use for scooping rice into a bowl. One day, Seishin had the dream of “Benzaiten” that holds the biwa. Then he came up with the idea to make shakushi using sacred trees from the beautiful shape of the biwa in around 1800. “Biwa” is a Japanese pipa. “Benzaiten” is the deity of a variety of things in Japan.

Hakone yosegizaiku is a wood mosaic craft that is made at Hakone-Cho and Odawara of Kanagawa. Its beautiful geometric patterns are made using the colors and grain that each wood has. These skills were made by Ishikawa Nihei in the late Edo period and have been handed down even today.

One thing that I’d like to introduce is “himitsu bako” of Hakone yosegizaiku. “Himitsu bako” means a secret box. It’s a box that you can’t open if you don’t follow the instructions. The shapes and ways of opening are different depending on the box. Pushing, shaking, or turning… You’ll definitely have fun!

Marimo is one species of algae group living in the water. Akan lake in Hokkaido is famous for marimo. It’s designated as a national natural treasure in Japan. The length of a big one is over 30 cm. Akan lake is the only place that big balled marimo inhabits in the world. Only Akan lake has all the environmental factors for it to live.

You can get marimo that you can grow around Akan lake!

Have you ever heard of “この紋所が目に入らぬか！” (konomondokorogamenihairanuka!)? This is a famous signature phrase of a Japanese TV show called “Mitokoumon” (水戸黄門). If you know about Japan well, you probably have heard of it!

The outline of the story is that Mito MItsukuni, who is the second lord of Mito, impersonates a merchant and improves the world while traveling around Japan. Inrou is a box that you put medicines in, and his subordinate shows it while saying the phrase. Once his subordinate shows it, no matter how bad people are, prostrate themselves before him. The mark of Inrou is the Tokugawa family emblem. The Tokugawa family had a high status in Japanese society.

You can get it in Ibaraki. Let’s buy it and say “この紋所が目に入らぬか！”

Have you ever watched “Princess Mononoke” (“もののけ姫” in Japanese)?  It’s one of the most famous Ghibli movies. Kodama is a cute character in it. Yakushima is one of the islands of Kagoshima that is considered as the set of the movie. The Forest is covered by moss and often fogged over. It’s really mystical. Yakushima is also famous for its cedar trees. There, you can see them that are over 2,000 years old. The average lifespan of them is about 500 years. Yakushima has the environment for them to live longer.

How was it? Did you enjoy it? I hope you find it interesting!

I’m interested in many kinds of things. I like art, philosophy, books, movies, taking pictures, playing the ukulele, baking, learning languages, and so forth. I’d like to make this world better.