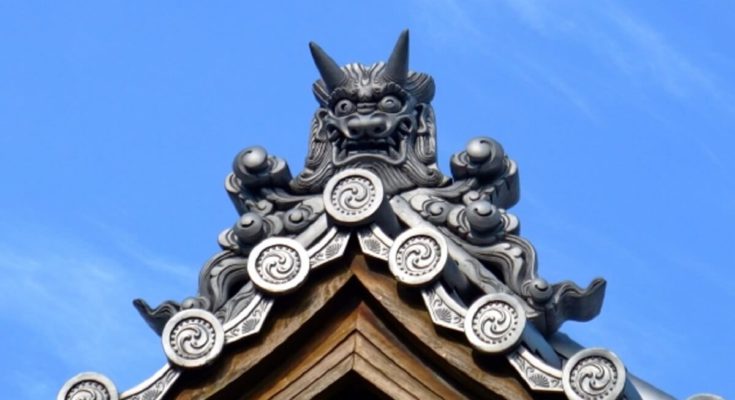 In Japanese we have the word “Satsuki Bare” that means a bright clear day in May, and we have more opportunities to look up at the sky than on dark winter days. The other day, I noticed there’s an onigawara(鬼瓦) on top of the roof when I looked up, and I thought, “Is it one of the unique features of Japanese culture? May foreign people be interested in it?” So I decided to choose onigawara as the topic for this month.

Onigawara literally means ogre or demon(oni) and roof tile(kawara). They are the kind of ornamental roof tiles observed at both ends of the roof of typical Japanese architecture. They are installed as a talisman to ward off evil spirits and as a decoration. They also play an important role to prevent rainwater from entering the building. They are called onigawara, demon-faced roof tiles, but don’t necessarily have the face of a demon. There are various kinds of designs. It is said that the origin of demon-faced onigawara comes from the fact that Medusa, which is famous from the myths of Greece, was placed on top of the entrance at the ruins of Palmyra in Syria, and it was handed down through the Silk Road and became onigawara.

The History of Onigawara

Japan’s onigawara has a 1400-year old history. It’s said that kawara, the roof tile itself, was introduced to Japan from Korea in 588 along with Buddhism. Four kawara experts were dispatched and used kawara for the first time in the construction of the Asuka-dera Temple. The oldest onigawara was excavated from the ruins of Horyu-ji Temple in Nara Prefecture, but it has a lotus flower design instead of being demon-faced. In the early ages, hanagawara, an ornamental tile with botanical design, was common. Then it was improved into oni-ita, a board tile with the face of a demon. Oni-ita were installed to ward off evil spirits and to stop roof leaks. It gradually acquired distinct demon-like features and became strongly three dimensional with horns.

The Functions of Onigawara

Sho-ki(鍾馗) is a Chinese folk god and believed to be stronger than demons. In the Kinki region in Japan, we can see the custom of placing Sho-ki statues on the roof to ward off evil spirits. There’s an anecdote which is assumed to be the origin of the custom.  Once upon a time, when a pharmacy in Sanjo, Kyoto was roofed with splendid onigawara, the resident of the house across the street suddenly fell ill with an unknown cause, which was thought to be caused by a bad thing that bounced back on the onigawara of the pharmacy and entered the house across the street, and it is said that when Shoki, stronger than demons, was made and used as a talisman, the illness of the resident was completely cured. He’s like a Demon Slayer!

While doing some research on onigawara, I found there’s a roofing and roof tile craft company called Kawara Craft Studio ILACA in my town. I asked them if I could visit there and hear about onigawara. They kindly accepted my request, and told me many things about onigawara and showed me some of their onigawara goods. I’ll show you some pictures in the studio and share the link.

I hope you get interested in onigawara, and look up to enjoy watching onigawara with various designs!