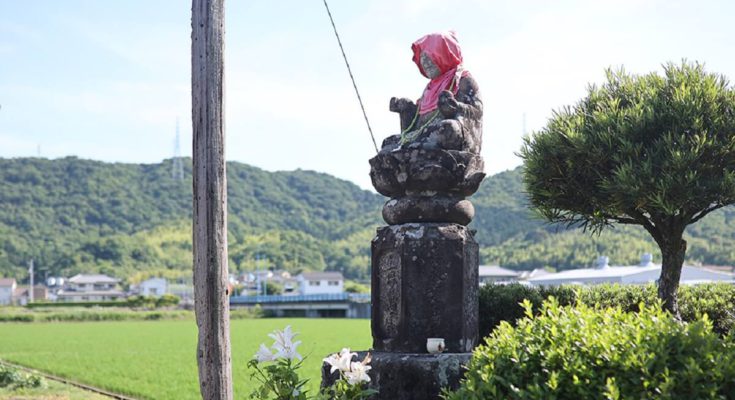 Have you seen the cute-looking  “Ojizo-san” statues before?

They can be found in many places, for example, at Buddhist temples, graveyards, and on the side of the road in Japan.

Ojizo-san’s real name is “Jizo Bosatsu（地蔵菩薩” a type of Buddhist statue.
They are believed to be the guardians of children and travelers. Ojizo-san, standing by the roadside with a gentle expression, may be the most familiar kind of Buddhist statue to Japanese people.

Jizo statues on high stands are often seen near the riverbanks of the downstream of Yoshinogawa River in Tokushima Prefecture. Such kind of Jizo statues are called “Taka-jizou(高地蔵” which means “tall high jizo” and are still cherished by the local people. It is said that Tokushima is the only place we can see “Taka-jizou(高地蔵” in Japan, though Japan has tons of “Ojizo-san”

Why are there many “Taka-jizou(高地蔵” in Tokushima?

Let’s take a moment to explore the reason.

In the area of “Aihata（藍畑”, in Ishii Town, located on the western outskirts of Tokushima City, there are still many “Taka-jizou(高地蔵.”  “Aihata（藍畑” means “field（畑）” of “indigo（藍,” and as the name implies, many indigo plants were grown in this area during the Edo period.

Indigo had been one of the most precious dyes in Japan, and Tokushima was the best producer of Indigo. Growing indigo requires rich, fertile soil and large amounts of fertilizer.

The Yoshinogawa River is said to be one of Japan’s top three abaregawa （暴れ川 , or wild rivers. In the past, the Yoshinogawa River was flooded by typhoons that came every year in late summer and fall, causing flood damage. When it floods, it was an uncontrollable river, so much so that it was nicknamed “Shikoku Saburo” (四国三郎). In such an environment, it was not possible to produce rice to be harvested in the fall.

On the other hand, the indigo plant was sown in early spring and harvested in July, before typhoons hit. Moreover, floods bring fertile soil into the field, making the soil suitable for growing indigo.The Tokushima Clan had developed its industry by taking advantage of its geographical location, despite the floods that would normally have caused enormous damage.

Local people felt sorry for “Ojizo-san” sinking every time flooding occurred, so they built a high base on which Jizo-san was placed to protect him from the flooding.

So dozens of them are scattered throughout the flat areas near the Yoshinogawa River.

This is the tallest “Taka-jizou(高地蔵” named “Higashi Kuroda no Utumuki jizou（東黒田のうつむき地蔵” located on the outskirts of Tokushima City. (“Utumuki” means to look down). The stand is approximately 3 meters high, and the total height of the pedestal is 4.2 meters. It is said that the higher the height of the “Taka-jizou(高地蔵”, the greater the damage caused by flooding.

Most “Taka-jizou(高地蔵” were built in the mid to late Edo period. Downstream of the Yoshinogawa River, about 190 “Taka-jizou(高地蔵” still remain today. Many of the “Taka-jizou(高地蔵” are decorated with flowers, and are beautifully cared for, showing that the local people care about them.

Surprisingly, when the area where “Taka-jizou(高地蔵” are located are overlaid on the map of expected flooded areas prepared by the Ministry of Land, Infrastructure, Transport and Tourism（国土交通省, it is said that the area overlaps the area. In addition, we can see the tendency that the higher the stand, the greater the risk of deep flooding.These characteristics have led some researchers to refer to “Taka-jizou(高地蔵” as ancestral hazard maps.

Jizo statues are relics of traditional wisdom left to remind people of past hazards, provide solace for the loss of young life, and give hope for future protection.

The Tokushima Plain was formed through repeated flooding by the tremendous flow of the Yoshinogawa River, which carried large amounts of earth and sand, and many people still live there. If you see “Taka-jizou(高地蔵,” please think about the lives of our ancestors who fought and lived with the Yoshinogawa River.

I’m a freelance editor and director based in Tokushima, Shikoku.
Travel is my passion.I love the time when the extraordinary life of a traveler and the everyday life of the people who live there intersect.
I mainly would like to share with you the lifestyle of the people of Shikoku and the sights to see. 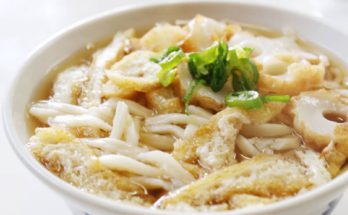 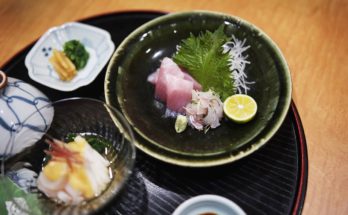 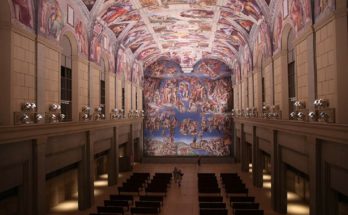 Another amazing in depth look at many un…