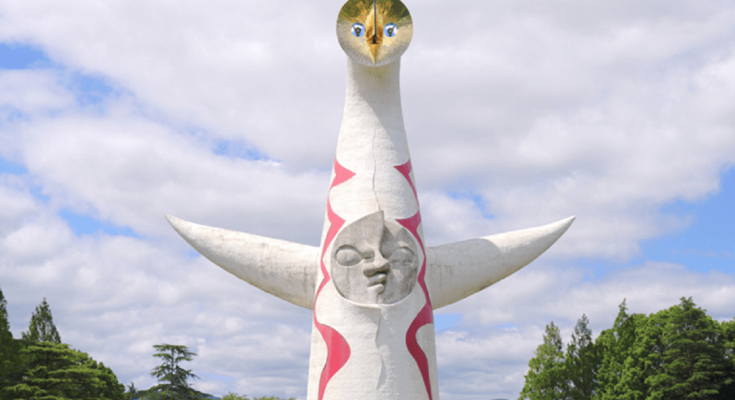 In 1970, the Japan World Exposition was held in Suita City, Osaka. It was the first Expo in Asia. This world fair lasted for 183 days and turned out to be a great success.  Seventy-seven countries participated in this big event, which attracted over 64 million visitors in total from all over the world. The venue has since been redeveloped into the Expo ’70 Commemorative Park, which is now one of the world’s most popular cultural and touristy attractions, and the pride of Osaka. I’d like to show you around this huge park, looking for the legacy of the Expo ’70 in Osaka..

Tower of the Sun (太陽の塔 taiyo no tou)

While most of the pavilions were removed or demolished after Expo ’70, it was decided that “the Tower of the Sun” would be permanently preserved. Since then, it has undoubtedly become a symbol of Expo ’70. This 70-meter-high tower has a truly bizarre appearance that is honestly neither beautiful nor cool at first sight. Let’s take a closer look.

The mystery of the Fourth Face

There is one more thing I would like to tell you. In fact, there was a “Fourth Face” called “the Sun of the Underworld” in the Subterranean Level Exhibition at that time. It represented the inner spiritual world of humans.  When the exposition ended, it disappeared and is still missing.

The artist, Taro Okamoto, who designed the Tower of the Sun, also left an extraordinary legacy inside the tower. In fact, the interior was sealed off for a long period of time after the exposition ended. Nearly 50 years passed before the tower was reopened to the public after earthquake-proofing work was completed. As soon as you step inside, you are enveloped in a mystical atmosphere. In the space called “prayer,” the “Sun of the Underworld” has been re-created and is on display with masks and the images of gods.

Further inside, a psychedelic world beyond imagination amazes you. Waiting before you, there is a tree-like object with branches reaching upwards. The object, called the “Tree of Life,” represents the process of biological evolution. At 41 meters high, it is covered from bottom to top with 183 biological models of 33 species, from protozoa to mammals. At the time of Expo ’70, visitors had to take an escalator to go up, but now, you can enjoy watching the process of evolution while climbing the stairs slowly.

The original Steel Pavilion, an exhibition facility at the time of Expo ’70, was renovated and reopened as Expo ’70 Pavilion in 2012 as a memorial hall.  A large number of valuable materials, photographs, and exhibits from that time are on display, including the brochures of each pavilion, tickets, companion uniforms, electric cars, and so on.  One of the most attractive reminders is video footage taken from a monorail ride around the Expo site, which definitely makes you realize how enthusiastic people were at that time of rapid economic growth in Japan. Another great display is a diorama of the venue back then made with craft paper. It was created to a scale of 1/300 and has been reproduced elaborately. Walking through this hall, you can feel the excitement of this period of time and the theme of Expo ’70, “the Progress and Harmony for Mankind.”

You will notice a monument in front of the Expo ’70 pavilion. It is called “Peace Bell” and was made from coins and metals which were gathered from 133 different countries. This bell was actually made as a replica. The original one was made in 1954 by Mr. Chiyoji Nakagawa, who was a director of the United Nations Association of Japan. He worked hard with the strong wish for world peace to mint the bell by collecting coins from people around the world, and he donated it to the UN headquarters in N.Y.  It was displayed in the UN Pavilion at the time of Expo ’70 but was returned to the UN Headquarters after the Expo was over.

There are many other remaining monuments in this park, such as fountains in the pond or parts of pavilions. Why don’t you check them out? Lastly, I’d like to show you a traditional Japanese garden. In comparison with the exciting feeling so far, you can feel the tranquil ambiance while strolling around the vast garden.

This Japanese garden was created by the Japanese government at the time of Expo ’70 with the best Japanese landscaping techniques. The trees and shrubs have continued to grow since then yet always maintained their beautiful appearance. There is a stream flowing from west to east, which represents the flow of the time. The entire garden is composed of four eras. Among them, you will find a waterless garden called 枯山水 (kare san sui), which is arranged with stones, sand, and plants. That is a stylized symbol of natural scenery, especially mountains and water. Although the garden appears to be simple and static, stay there for a while and feel how the subtle shifts of light and shadow affect the scenery. The discovery of beauty amid simplicity is the essence of the Japanese aesthetic tradition known as wabi sabi.

Expos have showcased human progress since they began in London in 1851. Take a wireless phone, for instance, which was called the “dream phone” at Expo ’70 and turned into a cell phone, which is a necessary item for people today. Expo 2025 Osaka, Kansai, Japan is going to take place in Yumeshima, Osaka. The theme is “Designing Future Society for Our Lives.” In my eyes, the technological advances over the past 50 years have been so dramatic that they are rather frightening. While people’s lives have become more convenient, the world is also facing many environmental problems. To deal with these problems, we have 17 Sustainable Development Goals (SDGs). We have to work on not only economic development but also environmental and social issues in order to sustain the world. Undoubtedly, Expo 2025 will play an important role in the realization of these global goals and in cooperation among nations. 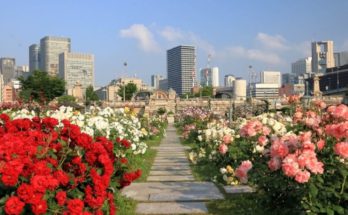 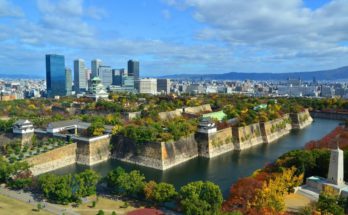 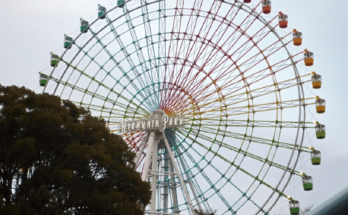 Hi Tomoko, I sincerely appreciate you…