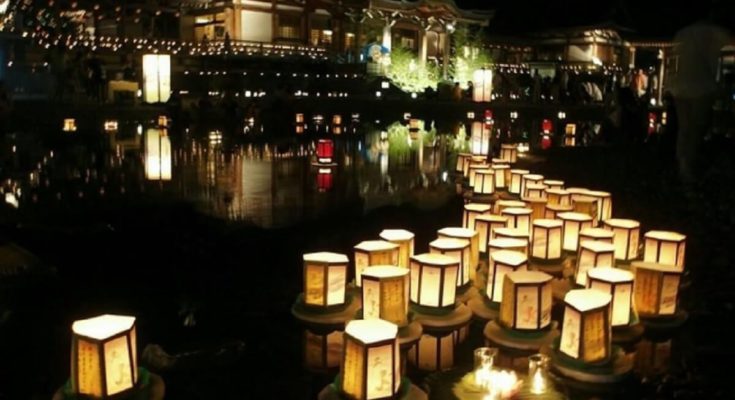 Now I’m writing this in the scorching hot mid-July. With August approaching, most Japanese people look forward to the Bon holiday which is the second biggest holiday after the New Year’s holiday. During the Bon holiday, Japanese family members are customarily supposed to celebrate the Bon Festival by getting together and honoring their ancestors. Then, what is Bon, also known as Obon, and what do we do during Bon, especially in Kyoto, my hometown?

Bon is originally a Japanese Buddhist custom to honor the spirits of one’s ancestors. The custom has evolved into a family reunion holiday during which people return to ancestral family places and visit to clean their ancestors’ graves. Because the spirits of ancestors are supposed to come home during Bon. Even though my husband’s family is Shinto, my late mother-in-law insisted on following the custom of Bon. The Bon Festival lasts for several days, but the starting day varies from place to place. In Kyoto, it starts the 13th of August and ends on the 16th. In other places in Japan, it ends on the 15th, though.

What do we do during Bon in Kyoto?

People in or from Kyoto start Bon with Rokudo Mairi (六道まいり) which means visiting Rokudo Chin-nouji Temple to welcome Oshorai-san (お精霊さん), the spirits of their ancestors, with a bell, and send them off with Gozan no Okuribi bonfire on the 16th of August. During Bon, people in Japan customarily visit their family graves and clean them up to pray for the spirits of their ancestors.

Rokudo refers to the six worlds (hell, hunger, animal, conflict, human, heaven) where the dead are guided according to their deeds in their lifetime. The entrance to the other world, the turning point for the six worlds, is called “Rokudo no Tsuji,” and Rokudo Chinno-ji Temple is said to be at the entrance. People in Kyoto go to the temple just before Bon to welcome the spirits of their ancestors by ringing the welcoming bell which is located in a belfry surrounded by walls on all sides and cannot be seen from the outside. It is rung by pulling a rope toward you, not swinging it forward.

Manto-e is a Buddhist lantern festival held during Bon in which a lot of lights, like a man (Japanese for 10,000) of them, are lit to welcome Oshorai-san. There are some places which hold Manto-e, like Rokuharamitsu-ji Temple, Mibu-dera Temple, Kurumazaki Shrine, or others. It is a really mysterious event.

Bon Odori, meaning Bon dance, is a style of dancing performed during Bon. Originally, it was a Nenbutsu folk dance to welcome the spirits of the dead. The performance or costume varies in many aspects from region to region. The music can be songs specifically pertinent to the spiritual message of Bon or local folk songs. Consequently, the Bon dance will look and sound different from region to region. The way in which the dance is performed is also different in each region, though the typical Bon dance involves people in yukata, a kind of kimono for the summer, lining up in a circle around a high wooden scaffold made especially for the festival called a yagura. The yagura is usually also the bandstand for the musicians and singers of Bon music. Some dances proceed clockwise, and some dances proceed counter-clockwise around the yagura. Some dances reverse during the dance, though most do not. At times, people face the yagura and move towards and away from it. The dance of a region can depict the area’s history and specialization. The music that is played during the Bon dance is not limited to Bon music and folk songs; some modern enka hits and kids’ tunes written to the beat of the “ondo” are also used to dance during Bon season. The Bon dance tradition is said to have started in the later years of the Muromachi period as a public entertainment. In the course of time, the original religious meaning has faded, and the dance has become associated with summer.

Gozan no Okuribi, the Send-off Bonfires of Five Mountains

After enjoying the family gathering with Oshorai-san, people in Kyoto send off the spirits of their ancestors’ to other worlds with Gozan no Okuribi, more commonly known as Daimonji (大文字). It is the culmination of the Bon Festival in which five giant bonfires are lit on mountains surrounding the city of Kyoto. Oshorai-san are believed to be returning to other worlds being led by those bonfires.

If you are interested in Daimonji, I recommend you to check out this link.

Did you figure out how people In Kyoto welcome and send off their ancestors’ spirit? Those customs are originally from Buddhism, but now it is not necessarily limited to religious things. If you have a chance to visit Kyoto during Bon, it’d be good for you to experience welcoming and sending off your deceased family’s spirits. I really look forward to welcoming my late husband’s spirit home. 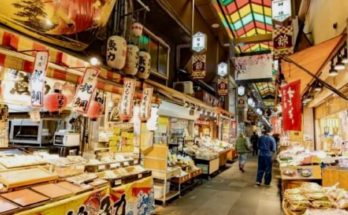 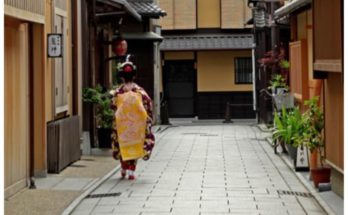 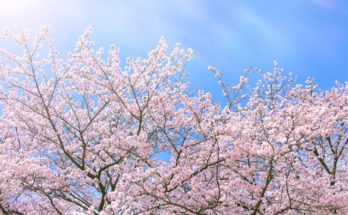