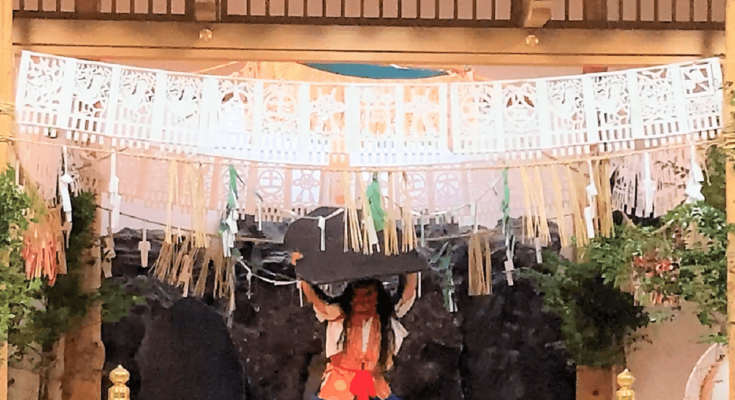 Do you know the Japanese myths written in Japanese oldest history books Kojiki (古事記) and Nihonshoki (日本書紀)? There are a lot of unique and cute gods in the myths. One of them, Amaterasu-Omikami (天照大神), is handed down as an ancestor of Japanese imperial family. She is the goddess of the sun. In Miyazaki Prefecture, there are some places where Japanese gods lived and made legends, and absolutely there is the place of Amaterasu-Omikami’s legend. Let’s take a look at the places where the Japanese gods spent their lives with stories of Japanese myths.

In Takachiho town, in the north part of Miyazaki, there is Amano-Iwato Shrine (天岩戸神社) .The shrine enshrine a cave as a holy place – Amano-Iwato (天岩戸).  In Japanese myths, Amaterasu-Omikami  hid in the cave, and the world was covered with darkness. What happened to her?

“Amaterasu-Omikami had two brothers, Tsukuyomi-no-Mikoto (月読命) and Susano-no-Mikoto (須佐之男命). Susano-no-Mikoto  was a malignant god. He often caused troubles to other gods. He destroyed rice paddies, dirtied sanctuaries with his excrement, and so on. One day, he threw a horse onto the roof of the room where women wove clothes. Unfortunately, a woman passed away due to the broken roof. Amaterasu-Omikami got depressed as she saw his terrible act, and then she hid in the cave and closed the door with a huge rock. After that, the world suddenly was covered with darkness.

A lot of gods got together and discussed in Amanoyasukawara (天安河原)

A lot of gods were worried about that, and they had a meeting all together. One of them considered some strategies. First, they brought roosters and announced that it was morning, but Amaterasu-Omikami  didn’t come out. Second, a goddess danced very well in front of the cave. Other gods sang a song and played music, and the dance was funny so every god was laughing out loud.

Amaterasu-Omikami  thought, “Why are they laughing? What’s happening?” So she opened the door a little and took a look at them and asked, “What are you doing?”  The gods replied, “Now, a new goddess is coming! She is better than you, so we are celebrating!!” But, it was a lie.

She wondered who was the new goddess, so she opened the door more, and other gods showed a mirror to her. They showed her herself by the mirror. She couldn’t see it clearly, so she leaned a little forward from the cave. At that time, the strongest god opened the door and pulled her arm. Finally, she came out and the world got back its light. This legend is called Amanoiwato-Densetsu (天岩戸伝説) in Japan.

Firstly, I highly recommend a tour at Amano-Iwato Shrine Nishi-Hongu(天岩戸神社 西本宮) because you can see the cave Amaterasu-Omikami hid in!! We can’t usually see it because it is very sacred. If you want to see it, you should take part in this tour. Please come to the meeting place below, it’s in front of the second torii gate. But, please be careful – you must not take a picture of the cave.

Secondly, I recommend you to watch Takachiho-Kagura (高千穂神楽) .It’s a short version dance of traditional dance Takachiho-no-Yokagura (高千穂の夜神楽) in Takachiho Town. This Takachiho-no-Yokagura is originated in the dance of Amanoiwato-Densetsu (天岩戸伝説) legend as mentioned above. People imitate some gods from that legend in this dance. People dance it to express appreciation for this year’s harvest and for wishing for a rich harvest next year. They usually dance it all night after finishing the harvest from November to February. So, it was difficult for tourists to watch it, so “Takachiho-Kagura was started for tourists. It is held for tourists every night from 8 to 9 p.m at “Takachiho shrine(高千穂神社)”．You can reserve on the internet.

As a side note, after Amaterasu-Omikami  hid in the cave, the strongest god threw a huge rock door in front of  the cave to prevent Amaterasu-Omikami  from hiding again. The rock was dropped in the middle of Japan, and it became Mt. Togakure (戸隠山) in Nagano Prefecture. There is Togakure Shrine (戸隠神社) in front of Mt. Togakure  now. The shrine enshrines the strongest god who threw the huge rock door.

The pond Amaterasu-Omikami was born in.

In Miyazaki City, there is Eda Shrine (江田神社). This shrine enshrines a couple of gods. They were the first married couple in Japan. The husband was “Izanagi-no-mikoto (伊邪那岐命),  and wife was Izanami-no-mikoto (伊邪那美命).  They gave birth to the land of Japan and a lot of Japanese gods.

Unfortunately, the wife passed away after she delivered the fire god because she got burns over her whole body. The husband mourned her death with deep grief, and went to the realm of the dead to get her back. He called her name and listened to her voice. She said, “I’m going to ask the gods of the realm of the dead if I can go back to the land of the living.” In addition, she said, “You must not take a peek inside at me.” But he couldn’t wait to see her and took a peek at her. Surprisingly, she had completely changed. She had become ugly. He was so scared and ran away. She got angry and ran after him because he broke the promise. He was able to escape and closed the gate to the realm of the dead by a huge rock. After that, he purified himself by taking a bath in the pond. At that time, the special gods were born from him, Amaterasu-Omikami, Tsukuyomi-no-Mikoto,and Susano-no-Mikoto.  In Eda Shrine, there is the pond where Izanagi-no-mikoto  purified himself in and where Amaterasu-Omikami  was born in. The pond is called Misogi-ike(みそぎ池).

In Miyazaki, there are more places and shrines related to gods in Japanese myths. Why don’t you come to Miyazaki and meet Japanese gods?

I was born and grew up in Chiba Prefecture. After getting married, I moved to Miyazaki Prefecture in 2022. I really like taking trips abroad and around Japan. I love Japanese history and nature, so I often go to historical places, mountains, rivers, and seas in Japan.