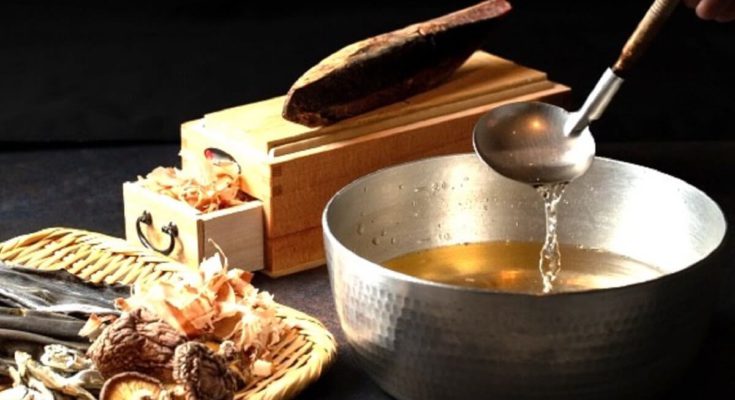 Today, I’ll be introducing a Japanese broth called “dashi” in this blog. As you might know, washoku, or Japanese cuisine, was recognized as an Intangible Cultural Heritage in 2013. One of the features of washoku is using dashi, which is both rich and savory. On top of that, dashi brings out the flavor of ingredients and is an essential key aspect of Japanese cooking.

Dashi is a Japanese soup stock which is boiled mainly dried bonito flakes or sea kelp in hot water. It’s full of nutrition and has plenty of taste; furthermore it brings out the true taste of the ingredients in food. You don’t need to add any seasonings for dashi; after preparing it, you can make various kinds of washoku with soy sauce, soy paste, and stuff like that. In everything, it’s important to have a good base.

How to make dashi

First, put pieces of dried sea kelp into a pan and soak it in water for a while. Next, heat it and when it comes to a boil, add some dried bonito flakes and dried small sardines. Then, remove it from the heat and strain it carefully. Finally, it’s done.

What a simple process it is! There is nothing like authentic dashi! It really makes Japanese-style soup delicious. According to legend, if you can do it well, you’ll become a full-fledged cook.

The difference of dashi between Kansai style and Kanto style

Generally, Kansai-style dashi is made of sea kelp, dried bonito flakes, dried small sardines ,and dried mushrooms. Osaka was the center of commerce in Japan and was well-known as the nation’s kitchen. Many seasonal ingredients were brought from around the country everyday. In particular, there was a sea kelp road which extended from the Seto Inland sea to Osaka, and this is why high quality sea kelp was always found in the markets around Osaka. For this reason, people living in Kansai put sea kelp mainly into their dashi.

Compared to Kansai, a Kanto style dashi requires dried bonito flakes. The Kanto area is located near the Pacific ocean and has a lot of fish. They have always made high class dried bonito since the early times. The process of making it has a lot of steps and takes a long time to complete. Among them, there are some extremely expensive products that you might only find in a specialty store. For that reason, people living in Kanto have used dried bonito flakes for making dashi.

Here’s the thing. There is more than meets the eye as to why the taste is quite different than just the main ingredient. The water is also different.

The water in Kansai tends to be softer because of its clay soil than in Kanto. This also helps to assimilate the sea kelp for much lighter taste. Unfortunately for those living in the Kanto region, because of its hard water,  sea kelp was much more difficult to successfully use.

I’d say udon, which is a  type of thick flour noodle, is a soul food for those living in Osaka and is a standard dish for lunch. It’s common to put boiled udon in a bowl and then add some warm soup to eat it. Making the soup for udon is very easy and simple. First, put some dashi, soy sauce, sake, and a bit of sugar into a pan and heat it. That’s all. In the Kansai region, we focus a lot on the soup rather than noodles, so let’s drink up all of the soup! Surprisingly, it’s quite healthy for you.

Of course, soba is also a great dish for using dashi. The soup looks darker than udon because the soy sauce is different. It seems like that, for soba, noodles are more important than the soup.

Oden is a type of hot pot which is made by simmering various ingredients together, such as Japanese radish, konjac, boiled eggs, fish cake, deep fried tofu, and so on. Regarding the meat and seafood, you can put in whatever you want. Oden’s soup is generally made from sea kelp and dried bonito flakes, which is your typical dashi, but the ingredients also bring their natural flavors which perfects the broth even more.

It’s a traditional Japanese rolled omelet which is flavored with dashi. The dashi helps make this egg fluffy. In the Kansai area, it’s called dashimaki-tamago and is well-known as a classic dish for everyday meals.

Another one is called atsuyaki-tamago which is made in the Kanto area, and it is mixed with sugar and soy sauce instead of using dashi.

To make dashimaki-tamago, first, heat the pan and put in the oil and pour a thin layer of the egg mixture evenly. Start rolling the egg mixture from the back towards you, using chopsticks. Repeat the process again and again until it’s done.

There are more dishes available such as miso soup, hot pot, simmering, cup-steamed egg, and so on. The list goes on and on.

☆The dashi that is included in cup udon is also divided by regions. For example, Nissin Food offers “Donbei” (どん兵衛) in both the Kansai style and the Kanto style.

Why don’t you try to see if you can tell the difference?

☆Standing noodle shop at the station

Did you know that every major train station has a standing noodle shop? However, depending on the region, the broth and the noodle served can be quite different. If you have time, why not check out the JR or local railway stations in Osaka, Nagoya, and Tokyo?

In August 2022, a theme park of dashi and dashimaki-tamago opened. You can enjoy the meal, shopping, and taking a factory tour. If you’re in Kyoto, by all means try and go there.

Did you get the feeling of how important dashi is for Japanese cooking? For many housewives, one of the first things that they learn is to practice making the perfect dashi to be used in  the simplest of foods like miso soup to more complex dishes like fusion dishes.

Thank you for reading! I hope to see you soon.

2 Comments on “Dashi influenced by the culture”