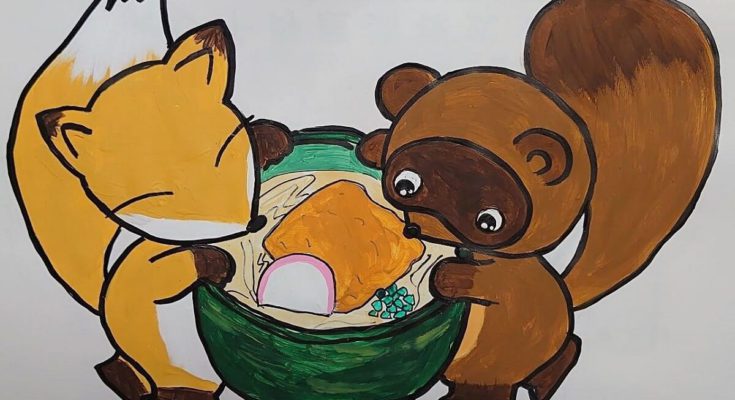 Hi! I’m Rei. I’m in Tokyo. One day, I was talking with my best friend Chisato who lives in Osaka.

Rei: It’s getting colder, isn’t it? Winter is just around the corner!
Chisato: Yeah! I feel like eating hot udon today.
Rei: Right! Or soba! They make us warm!
Chisato: Exactly! We can eat Kitsune or Tanuki easily everywhere in Japan!
Rei: I love Kitsune soba.
Chisato: What?????

What image do you have when you hear the words Tanuki (raccoon dogs) and Kitsune (foxes)? Animals with fluffy tails? For sure! Everyone knows foxes, right? How about raccoon dogs? If you live in Europe or America, you might not have a lot of opportunities to see them, but it’s an animal that is similar to a raccoon. In mountainous areas in Japan, it’s not so uncommon to see wild raccoon dogs. Their tiny round eyes might attract some animal lovers, but they are often described as characters who can disguise themselves as humans and do some tricks in old tales.

Oooops! Don’t worry! We never eat them to get back at them. Let’s go back to the topic. Today, we’re going to talk about Japanese noodles, udon and soba. Udon is white thick flour noodles, and soba is buckwheat noodles.

If you go to udon or soba restaurants in Tokyo, you can see Kitsune udon or soba on the menu. What are these? Kitsune means noodles with deep-fried tofu called “a-ge(あげ).” If it’s on udon, we call it Kitsune udon. Of course, if it’s on soba, it is Kitsune soba. When you order Kitsune, you have to say udon or soba clearly. If you just say, “I’ll go with Kitsune,” the waiter will ask you, “Which do you want, udon or soba?” It’s quite simple, isn’t it?

I love Osaka udon. For Osaka people, speaking of Kitsune udon, it’s an udon noodle topped with “a-ge” simmered in soy sauce and sugar. It’s a basic udon in Osaka. Kitsune soba doesn’t exist here! When you go to an udon restaurant in Osaka and want to eat Kitsune udon, it’s ok to say, “Kitsune!” It’s very simple, isn’t it?

In Tokyo, Tanuki means a dish with tenkasu, crumbs of crispy fried tempura batter. Just as when you order Kitsune udon or soba, all you have to do is order Tanuki udon or Tanuki soba. Imagine tempura udon/soba without ingredients. Do you think it’s cheesy? Don’t underestimate it! I bet you’ll enjoy eating its crunchy and fluffy tempura batter spread on your bowl with noodles!

In Osaka, Tanuki means a soba noodle topped with “a-ge” simmered in soy sauce and sugar. Yes! That’s right! Tanuki in Osaka equals Kitsune soba in Tokyo. Are you confused?!

What is Haikara? In my book, Haikara is a word to describe something new and fancy. This word was used decades ago, and we never use it in our daily conversation. Not to mention, you can’t find any dish called Haikara at udon or soba restaurants in Tokyo.

In Osaka, at udon and soba restaurants, Haikara means udon or soba with tenkasu.

When you order Haikara, you have to say udon or soba clearly.

The origin of Kitsune udon is said to be in Osaka. A shop owner who trained at a sushi restaurant opened an udon restaurant. He was inspired by oinari san※1, which is a type of sushi with “a-ge,” and he served udon with “a-ge” as a side dish. It was the origin of Kitsune udon and called “Konkon udon” at that time. Konkon is a Japanese onomatopoeia of a cry of foxes.This udon became a big trend in the merchandise city of Osaka, and it was called Kitsune udon.

※1 Oinari san: “A-ge” is said to be a favorite food of foxes, messengers of the god Inari. Because “a-ge” was considered an offering at Inari shrines, sushi made with “a-ge” came to be called “inari-zushi, inari-san, or oinari-san.”

It is said that Tanuki udon was created in Tokyo at the end of the Edo era (1603-1867). When it comes to its name, there are some theories. One of them is like this. Ingredients of tempura are called tane. If we take away the ingredients (tane), there is tempura without tane. Taking away is “nuku” or “nuki” in Japanese, so it is “tane-nuki,” and for some reason, it became “tanuki.” In Osaka, it was just used as an opposite word of kitsune because foxes (kitsune) and raccoon dogs (tanuki) are often described as two similar but different characters in old tales in Japan.

As we mentioned, the word Haikara is used to describe something new and fancy.

Why was that word used for udon and soba in Osaka?

When Osaka people saw Tanuki udon and soba in Tokyo, they sarcastically remarked, “Tokyo people put tenkasu, which can be thrown away, into udon, it’s so Haikara” which led to the term “Haikara udon” in Osaka.

～Message from Chisato and Rei～

Rei: Oh my gosh!!!!!
Chisato: Oh my gosh!!!!!
Rei: We both have Kitsune and Tanuki on the menu, but they’re totally different!
Chisato: Very interesting!
Rei: Next time when I go to Osaka, I’ll order HAIKARA. I’m so excited!!
Chisato: Yes! We never have Tanuki udon. I will eat Tanuki UDON in Tokyo! Haha!

Chisato and Rei: Everyone, if you go to udon or soba restaurants in Japan, remember this article and enjoy slurping noodles as much as you want. It will be a wonderful memory!!

Thank you for reading our article!

(Rei) English teacher for children. My source of energy is my students’ smiles full of curiosity. Simple living is my motto.