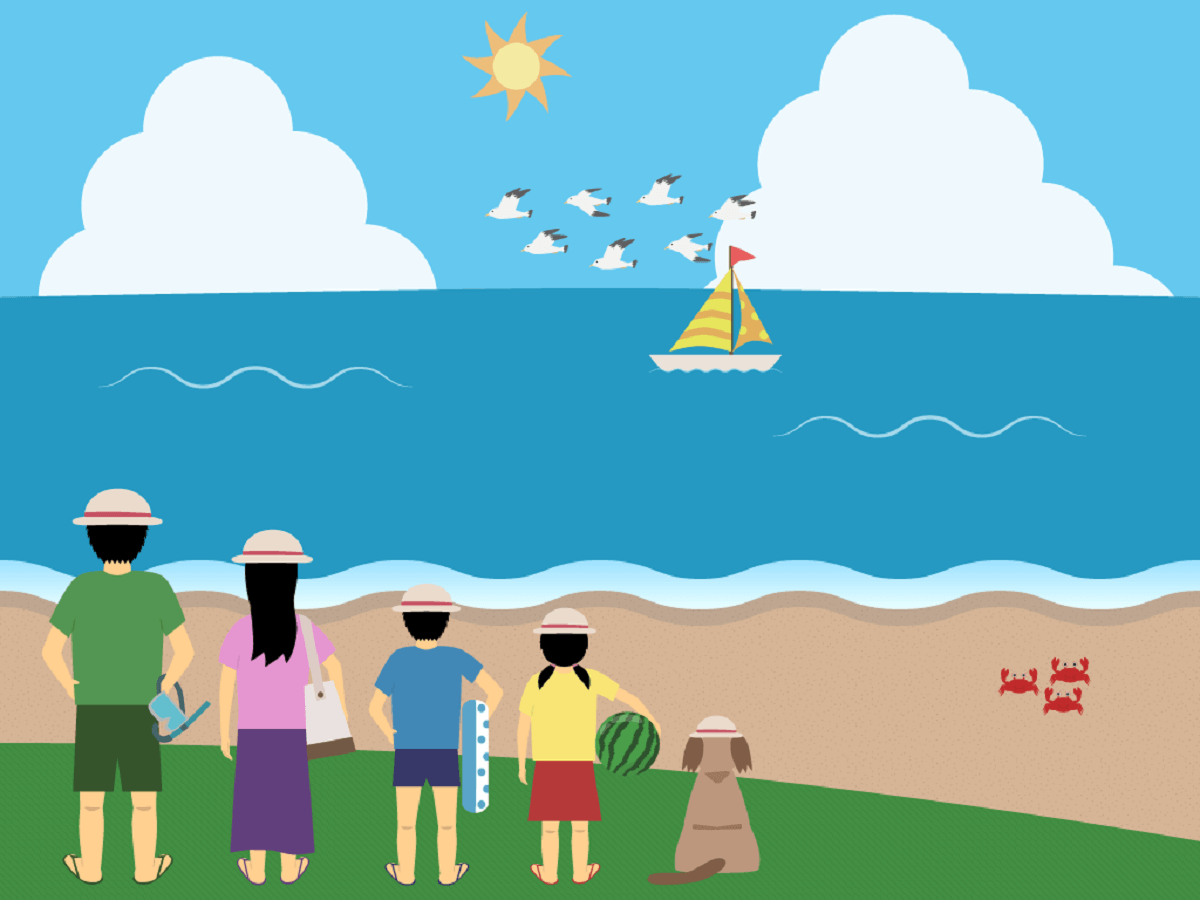 I feel like some of the readers here aren’t particularly excited to see this series of the holidays observed in Japan every single month, but it is my responsibility to finish this sequel till the end no matter how you feel about it. Let’s take a deep breath and take a look at the rest of the holidays!

Oh, by the way, before we look into it, I just want to let you know that there are no national holidays in June, which is my birth month. I have no idea about it but I strongly feel that we need holidays in June as well since it brings the beginning of the muggy rainy season. We need to take some time off before entering a horribly blazing summer!

This is a day to appreciate the tremendous benefits that the ocean brings us and pray for the further prosperity of our country since Japan is an island that has no neighboring counties and is surrounded by the ocean. Besides, there aren’t enough natural resources and food for Japan to meet all of its domestic demands. It has brought the situation that Japanese people need to explore the ocean and exchange or buy necessary goods to survive even in this day and age. The ocean is vital for Japanese people.

The origin of this holiday relates to the Emperor Meiji again, who was once mentioned in the previous article for the Constitution Memorial Day.

Because of the magnificence that led Japanese emperors to behave as supreme royal persons, it was considered almost unthinkable for the emperor to travel around domestically to see what and how ordinary people’s lives were going. However, the Meiji Emperor, Mutsuhito, was the one who broke that tradition and tried to capture many things happening in his country at the time by seeing them for himself. That attitude led him to visit the Tohoku(東北) region in 1876, where there must have still been severe scars and damage everywhere caused by Japan’s most recent civil war which took place from 1868 to 1869. It was only 9 years after his inauguration and the revolutionary change from the Edo period to the Meiji period.

July 20th in 1876 was the day he returned from his 50-day visit to Tohoku and his ship docked at Yokohama. The enactment of Marine day happened 120 years after that day following the period which was named “Marine Anniversary Day”, starting from 1941. It wouldn’t have become a national holiday until 1996 if it weren’t for the movement from the fishing industry that aimed to make July 20th a national holiday. It was originally celebrated on July 20th, but in 2003, it was changed to the third Monday of July in order to promote the tourist industry by making a three day weekend from Saturday to Monday so that people feel comfortable taking a short trip, in accordance with the revision of the “Act on national holidays”.

This is the newest established holiday in Japan. It was 2016 when this holiday came into effect followed by the movement from a parliamentary association for promoting establishing a national holiday for raising awareness of the importance of mountains. Since Japan is a mountainous country with 60 – 70 % of its land uphill or upland, it has been considered that people in Japan take advantage of the blessings of mountains as well as the ocean from ancient times until this day, After Marine Day became an official national holiday, five alpine clubs in Japan were in cooperation together to spread the idea of creating a holiday associated with mountains. Following that movement, a parliamentary association for creating an alpine holiday was organized in 2013, and it actually played a major role in the movement and finally accomplished its goal in 2016.

There is a story about the process of setting the holiday on one particular day. It was once discussed that Mountain Day should be set on August 12th, the day before the Bon holiday generally starts so that people can spend a longer holiday by connecting one more day. For your information, the Bon holiday is not an official national holiday, but it’s a special period of the traditional family event commemorating our ancestors. A lot of companies let their employees take summer vacation during this period.

However, August 12th falls on a day Japan Airlines flight 123 crashed in the area of Mount Takamagahara (it’s more commonly known as Osutakayama in Japan), Ueno, Gunma prefecture. Over 500 passengers and flight crew out of 524 people on board died in this tragic accident. There were consistent criticisms to the idea of setting Mountain Day on the same day of this deadliest single-aircraft accident in aviation history, and the area the flight crashed was in the mountains. Citing the concern that people would easily associate the place with that holiday since they both have “mountain” in common, Mountain Day was eventually set on August 11th instead of 12th.

By the way, if you have a glimpse of a calendar that is sold in Japan, you’ll notice that Marine Day, Sports Day (It’ll be covered in a future article) and Mountain day fall on July 22nd, 23rd and August 8th in 2021.. You may wonder and want to know why. This is because it ended up that the Tokyo Olympics got held off from 2020 to 2021 due to the spread of COVID-19. The Olympics’ opening and closing ceremonies are going to take place on July 23rd and on August 8th respectively. It hasn’t officially been announced whether it will be held with or without any spectators at the time of writing this article yet, but there was a concern that bumper-to-bumper like heavy traffic jams will be expected if those changes weren’t made since both of the dates are normal working weekdays for most of the workers. Thus, the government changed those holidays to disperse traffic for the athletes and any people who are concerned with the Olympics.

Third Monday of September: 敬老の日
(Keirou no Hi: Respect for the Aged Day)

This is a day to express our gratitude and show our respect to all the aged people who have contributed to the development of Japanese society. General ways to celebrate this event are giving precious things as gifts, throwing a family party and celebrating when they’ve reached the point after while they’ve been through many ups and downs in their life. There is no specific age to be celebrated on that day. It is also common for elementary school kids to visit nursing homes to interact with them by singing some songs and just chatting with them.

Apparently, the origin of this holiday is believed to be when a local thanking ceremony for the elderly started in a small village in Hyogo prefecture on September 15th in 1947, the time Japanese society was still far behind recovering from the catastrophic damage caused by their defeat in WWII. It was initially called “年寄りの日 Toshiyori no Hi” which has a negative connotation when describing the elderly. If I were to translate it directly into English, it may be “Old people’s day”. Sounds a bit too straightforward, doesn’t it? Considering the subtle impoliteness of the word 年寄り, it was renamed to “敬老の日 Keirou no Hi: Respect for the Aged Day” and it was added as a national holiday officially in1965.

For those who are keen on learning the origin of this holiday, there are several other theories about this holiday, but I’ll give you one most popular episode very briefly. Although it’s neither scientifically nor historically proven yet, it’s been said the origin of Respect for the Aged Day is when 聖徳太子(Shotoku Taishi), one of the most renowned Japanese historical figures dating back to around 1,500 years ago, built a nursing home for elderly people on September 15th in 593.

Although it has gotten too long again, it’s finally getting to the point where you can see the light at the end of the tunnel. I’ll try my best to wrap up this series next month!

To be continued in part 4.