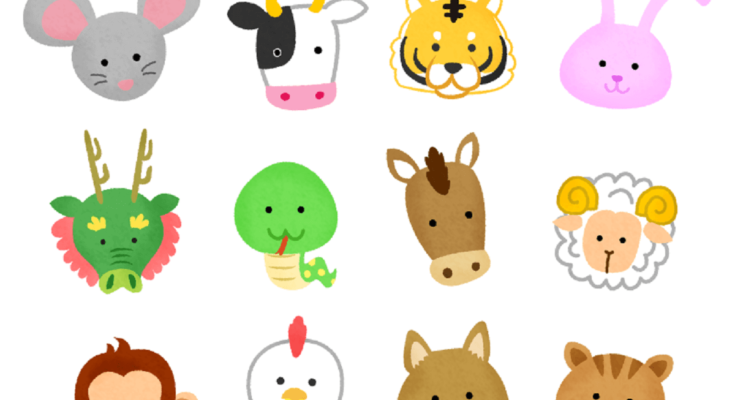 Has anyone heard of 十二支 (Juni-shi)? Junishi is the twelve animal signs of the Japanese zodiac that are used for directions and the almanac, which have been commonly used in Japan. Some of its essence is still influencing Japanese society and its people.

In this article, you’ll find the origin, historical meaning of it. We’ll talk about  how it influences our lives in another article.

First of all, let me point out the common misunderstanding between 干支 (Eto) and 十二支(Juni-shi) which many Japanese natives don’t even recognize. As a native Japanese, I feel like most of us mix them up, but they are actually two different things.

Eto is a sexagenarian cycle that was invented way back in ancient China. A sexagenarian cycle means one cycle completes every sixty years. It was originally used for recording time and consists of two distinctive calculations that were related to the time and directions.

To explain what exactly Eto is, we need to break it down into two separate concepts.

The first one is called 十干 (Jikkan). To explain the origin of Jikkan, we need to get back to ancient China again.

It was believed that the five different elements that were 木 (Wood), 火 (Fire), 土 (Earth), 金 (Metal), and 水 (Water) generate and overcome interactions each other. In short, it’s named the Five Phases. According to the theory, every occurrence and phenomena we see and we don’t see not only in the world but in the universe can be explained by using this theory.

Jikkan is seemingly a combination theory of the Five Phases and Ying-Yang (陰陽). Ying-Yang is the theory that explains that everything consists of two conflicting elements such as men and women, light and darkness, day and night, etc. Eventually, you can see there are ten different types of elements in the following chart.

The second part is called 十二支 (Juni-shi). It has been used to describe time and directions using twelve different animals in a symbolic way. Take a look at the charts below. These are the twelve animals listed in the 十二支 (Juni-shi).

There is an interesting myth which has been passed from generation to generation on how those twelve different animals were selected as 十二支 (Juni-shi). There are a bunch of other types of stories but let me introduce the standard one here.

On one day close to the end of the year, God announced that any animal that came to his place on New Year’s Day would be given a title as general of the year, from the one who comes first to the twelfth in order. Although the animals got excited by this announcement and waited for the day to come, the cat didn’t show up to God’s house on the day of announcement. So he asked the rat when the race would be held. In order to get rid of potential rivals, a lightbulb went off in the rat’s head. He told the cat that the day of the race was January 2nd, which was one day later than the real racing date. The cat completely fell for it and went back to his home.

On New Year’s Day, the ox left his home for God’s shrine before dawn, worrying that he could only walk at a snail’s pace. Right off the bat, the rat saw the ox departing his home, the rat jumped on the ox sneakily. The ox didn’t even realize it. When the ox got to the God’s shrine, the gate was still closed and no one was there.

When the gate finally opened, the rat immediately jumped off the ox, ran to the shrine, and got the first prize. The ox finished in second, and then ten other animals made it to the finish line.

What do you think happened to the cat? Well, when the cat made it to the shrine, there was no one and he wasn’t given any title because it was already done a day earlier. The cat finally realized he got deceived by the rat. That’s the starting point when cats start running after rats.

We went off on a tangent a little bit, but as a result of combining Jikkan and Junishi, the Sexagenarian cycle was developed since the least common multiple between Jikkan (ten) and Junishi (twelve) is sixty. I won’t go deeper into it because it’s a much more complicated concept, but one thing related to Japanese custom that is still widely known is when a person turns sixty years old, we call it 還暦 (Kanreki). It means that the sexagenarian cycle has completed one  60-year cycle and begins again. We normally celebrate the age of sixty with family as one of our traditional customs.

This article has already gotten long enough. It feels right to wrap it up for now. I’ll write about how Juniishi influences our culture and people in a future article. Bye for now!