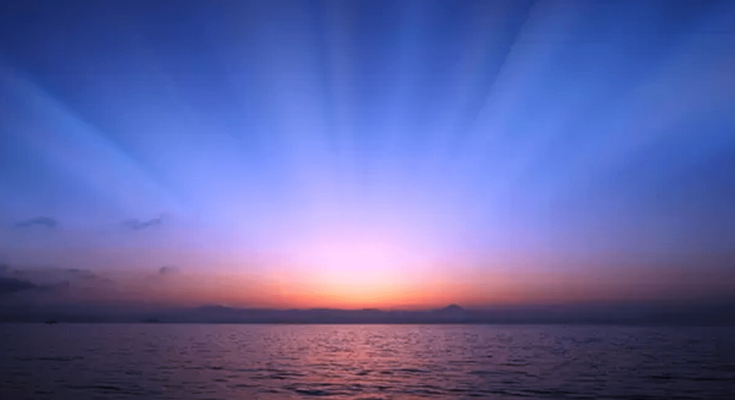 Japan is located at the eastern edge of Asia on the world map and has been called the land of the rising sun. The word “Nippon” (日本) literally means the source of the sun. And because of its shape stretching from north to south and its position on the earth, Japan can get the benefit of sunlight from different angles throughout the year. This gives Japan four distinct seasons. Now, I would like to introduce how Japanese people feel about the sun in their daily lives.

First of all, strangely enough, it is a fact that Japanese people, especially elementary school children, have little awareness that Japan is an eastern country. Why is that? Please look at this map to find out why.

As is often the case in any country, people draw their country in the center of the world map. This map does not allow us to recognize the eastern edge. In fact, elementary school students in Japan learn with this map, so they sometimes have the wrong idea that Europe and America are very far apart.

This is the standard world map on which the datelines are based. On this map, Japan is the easternmost country, right?

What color is the sun?

Next, there is a difference in the perception of the color of the sun. When Japanese children are asked to draw a picture of the sun, most of them draw it in red. On the other hand, most of the children in other countries draw it in yellow, orange, or gold. It is true that the actual color of sunlight is closer to white or yellow, so you may find it strange that Japanese culture uses red to represent the sun. There are some theories about this. The color of the sun varies slightly depending on the distance from the equator. However, in the case of the Japanese, it is said that they are strongly influenced by the design of the Japanese flag. The Japanese flag, also known as the hinomaru (日の丸), is a red circle on a white background, with the red representing the sun. Isn’t it interesting?

Words of the sunrise

In the Japanese language, there are quite a few words related to dawn or sunrise. Some of them are ancient words that have been used in poems. Even the time of dawn is categorized in detail. These expressions can only be found in Japanese. Japanese people have created many beautiful words by sensing and observing the slight changes in nature. I’d like to show you some of them.

It is known as an old word that means from half past midnight to the darkest time near dawn, which refers to the state before the sky becomes completely bright.

The word literally means “east and cloud.” This refers to the time when the eastern sky becomes slightly brighter.

This is when the sky is getting brighter and when the dawn is breaking.

This word represents dawn, the time of day when the sun rises. It can also mean the beginning of something.

The beautiful sunrise feels full of energy and gives everybody power. Do you know the word goraikou? Goraikou is the sunrise seen from the top of a mountain, and it is said that the higher the mountain is, the greater blessing you get.

The word hatsu-hinode refers to the first sunrise that can be seen on New Year’s Day. For Japanese people, New Year’s Day is a special day that signifies a new beginning or a fresh start. Everything we do for the first time in the new year has an important meaning. Therefore, we believe that going and seeing the first sunrise is very auspicious and brings us good fortune and happiness throughout the year.

The highest mountain in Japan is Mt. Fuji, which is loved by people all over the world because of its beautiful shape. It would be the greatest blessing if you could see the sunrise on New Year’s Day from the top of Mt. Fuji. Unfortunately, it is closed during the winter. However, there is another way to get a blessing from the sun. Finally, I would like to introduce a marvelous sunrise. It is called “Diamond Fuji.”

Diamond Fuji is a phenomenon in which sunlight appears to shine like a diamond at the exact moment the sun rises from behind Mt. Fuji. It is so beautiful and precious. Diamond Fuji cannot be seen from just any place where Mt. Fuji can be seen. It is a miraculous phenomenon that can only be seen in a limited number of places and under specific conditions. Lake Yamanaka in Yamanashi Prefecture is one of the most famous spots among photographers. Whichever location you choose, make sure to do your homework carefully. You can also participate in some guided tours. The ring of light glittering on the summit of Mt. Fuji is such a mysterious and breathtaking moment. It is a true masterpiece of nature.

For Japanese people, who have a history as agricultural people, the sun has an important role in our lives. Even now, we live our lives somehow sensing the movement of the sun. For example, in Japan, the vernal and autumnal equinoxes are national holidays. They originated from  imperial events. Now, there is no special event on that day, but it is a day that makes us aware of the changing of the seasons. The summer and winter solstices are not holidays, but we subconsciously sense them and often talk about how the days are becoming shorter or longer. I think Japanese people have special traditions which are enjoyed according to the seasons. Have you heard of “the 24 solar terms”（二十四節気 nijushi-sekki)?  This is a calendar that divides a year into 24 equal parts based on the position of the sun. Equinoxes and solstices are included. Each term has a name that refers to a detailed weather description. Not all of us understand all of them, but we see them marked on our calendars or hear about them on TV news, and it acts as a guide to the seasons.

Thank you for reading to the end. My room faces east, so I can feel the power of the sun every morning. Due to climate change, the weather these days is often unpredictable, and the seasons don’t shift as gradually as they used to. In the summer, the sun feels like a killer to me, but in the winter, it becomes very loving. I hope this article will help you to understand the various aspects of the sun.