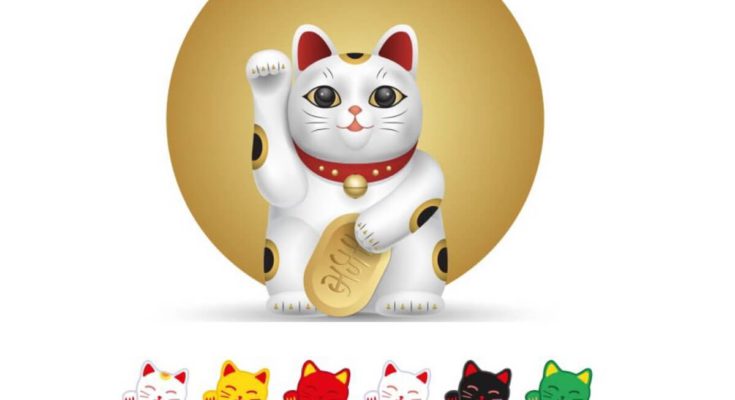 Manekineko, a beckoning cat, is well known as a figure which you can find at the entrance of the shops or restaurants in Japan. It can be found with either the right or the left paw raised. A common belief is that the left paw raised brings in customers, while the right paw brings wealth. However, the origin has not been proven yet. There are several episodes that depict its birth or the history of the Manekineko.

Imado Yaki (今戸焼) is a kind of terracotta ceramics produced in the Imado area, the northern part of Asakusa, along the Sumida River in Tokyo. The production of Imado Yaki started in the 1570s in making roof tiles and daily tableware;  later, they created earthenware figurines which represented sumo wrestlers, foxes, horses, etc.

It is said that a woman who lived in the Imado area couldn’t afford to keep her cat, and she sold it. Then in her dream, the cat appeared and told her if she created the figurine of cats, she would be successful. Once the woman produced the cat dolls and started her business to sell them in front of Asakusa Shrine, the figurines sold well and gained a great popularity.

Look at the sign below. This sign is called Maru-Shime  (背の丸締め), which means “successfully gained” (まるく、せしめる). This episode is supposed to be the story of the first Manekineko figurine.

Ii Naotaka (井伊直孝, 1590-1659) was a Japanese daimyo of the early Edo period. He helped the Tokugawa Shogunate, and the Ii family (井伊家) was allowed to rule the Hikone area from 1615.

One day around 1620, Naotaka visited Kotokuin Temple (弘徳院) on his way back home from hawk hunting. When he was passing by this temple, a cat was waving its hand as if it were inviting him into the precinct. He followed the cat, then it suddenly rained heavily with thunderstorms.

Naotaka thanked the cat and the monk for saving him from the drenching and later, started to assist this temple. Koutokuin Temple changed its name to Gotokuji Temple (豪徳寺).  Ever since, they called that cat Manegi-neko 招福猫児 (まねぎねこ), not Maneki-neko.

After the cat passed away, they made a statue of the cat to commemorate its great relationship with the temple and Ii family.

Hiko-Nyan, A Mascot of Hikone

In 2006, at the 400th anniversary of Hikone Castle in Shiga Prefecture, a new character called “Hikonyan” was created. The idea of the character was derived from the story of Gotokuji in Setagaya, Tokyo with Ii Naotaka. And Hikonyan wears their traditional red armor called “Akazonae” (赤備え).

In 2010, Hikonyan won the first prize in the Yuru-kyara competition, which is a competition to find a simply designed character which creates a familiar image to everyone.

At Yanaka Ginza, there is a traditional shopping street called Shotengai in Yanaka near the Nippori Station in Tokyo. Apart from shopping, you can find cats wandering the narrow crossing roads around this street, and the locals have a great affinity for those cats.

The cats in Yanaka are not special ones. They are just living their daily lives there, not doing a specific exhibition or performance. That is the reason why many cat-related items are sold in Yanaka Ginza.

Please check out these links:

Imado Shrine (今戸神社) started as Imado Hachiman (今戸八幡), originally dedicated to the deity of war. The shrine is now associated with good relationships. It enshrined two legendary deities: Izanagi & Izanami, a pair who supposedly created this country. Therefore this legend was combined with the episode of Imado Yaki.

Now Manekineko at this shrine appears in pairs to bring us love and fortune. It is one of the most popular tourist destinations when you come to walk around the Asakusa area.

With or Without a Golden Coin?

Up to now, you’ve already noticed that there are no coins with Manekineko at Imado, Gotokuji, or Yanaka. I think the general image of manekineko is always holding a golden coin, Koban, in its hand. The bell around its neck was supposed to change into a coin.

Probably the idea of inviting wealth and the wealthy image of golden coins were gradually combined together during the Edo period, and there are no funny feelings about that now. Especially in the business scene, at the shops or the restaurants, golden coins are a must to display with Manekineko.

There is a proverb which mentions cats in Japan. It is “Neko ni koban”(猫に小判),which means that something is useless, because cats cannot understand the value of gold coins. It is quite a famous proverb and everyone could understand what it tells us as truth.

What about manekineko? Most of the manekineko at shops and restaurants in Japan probably hold a golden coin. Is it a controversy?

Actually there is no relationship between this proverb and Manekineko stories.

“Neko ni koban” is found in playing cards used in Kyoto in the Edo period in Japan. The proverb itself is quite familiar with Japanese people. However, for visitors from overseas, it is a somewhat complicated story.

Manekineko was not a boom. In the late 1800s, the first mass production of manekineko started in Seto City (瀬戸市), Aichi Prefecture. This is because people demand Manekineko as a regional toy or a souvenir and Seto City is famous for its pottery and ceramics. So the manekineko in Seto City are made of porcelain, a kind of ceramics.

Tokoname City (常滑市) in Aichi Prefecture is one of Japan’s six most important ancient kiln towns – the others are Bizen, Echizen, Seto, Shigaraki, and Tanba.

In the 1940s, Tokoname City started a mass production of Manekineko with the most familiar contemporary design. We could say that this is the definitive modern edition of manekineko which we see all around us.

Manekineko are now all over Japan and have been entertaining the locals and visitors from abroad. Once you know its origin in detail, you will notice that cats have been and will be our partners even in this imaginary world.