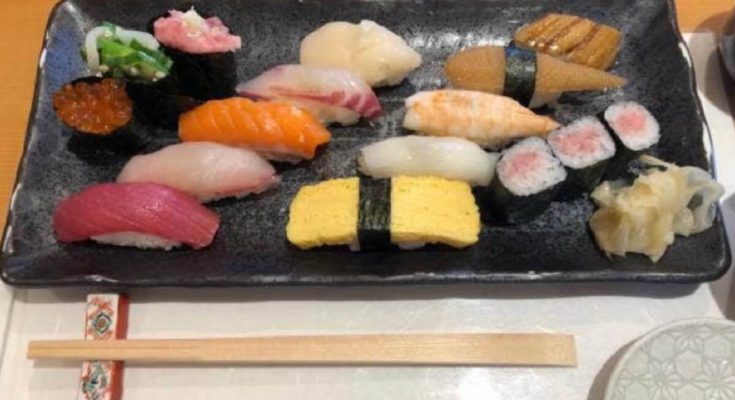 Sushi, generally consisting of vinegared rice and a topping, is a traditional Japanese delicacy and is now a well recognized cuisine worldwide. However, the word “sushi” has been typed differently in three ways in kanji over the years plus in one way in Roman letters: 鮓, 鮨, 寿司, and “sushi.” These expressions include some meanings which tell us the history of sushi according to each era.

“Sushi” began in Southeast Asia and came to Japan

Around the 4th century B.C., people living in mountainous areas in Southeast Asia needed to preserve fish meat as a food to consume. They used rice as an agent of fermentation: only the fish was eaten, the rice was thrown away. This was the origin of sushi and this preservation system was introduced to Japan.

Around the 8th century, people called this fermented fish “Nare-Zushi” (なれ鮓) in Japan. Narezushi is made of three components—fish, salt, and rice.  Nare means aged, and this fermentation process took fairly a long time (for one year!) before people consumed the fish. Actually, Narezushi was mainly eaten among the aristocrats or dedicated to the deities at the ritual site of shrines. The kanji “鮓” was used to describe this type of sushi. This is a kind of old usage. We rarely see this kanji used for sushi in our city life now.

Later in the 14th century, the fermentation process was shortened and people started to consume both fish and rice. This is called “namanare” (なまなれ), and the vinegar played an important role to prepare this kind of sushi much faster than before. People put the fish and rice into the box and pressed it by using stones. This is the origin of “oshizushi” (押し鮨) or “hakozushi” (箱鮨) mainly in the Kansai area of Japan. The shape of this sushi is in a rectangular prism or cube. The kanji 鮨 was started to use to express this kind of sushi.

Nigirizushi came into being in the late Edo Period.

In the 1800s, nigirizushi started to appear as fast food at food stalls. Nigirizushi is made by pressing the sushi rice in between the chef’s palms and hands. You finish by adding a topping of the customer’s choice. Nigiri is the noun form of the verb “nigiru” which means to squeeze. The rice and other toppings are squeezed tight together, so it can be eaten as a whole.

The nigirizushi at that time was much larger one than we are familiar with. It was like a rice ball and was cut into two pieces. That is why nigirizushi is served in two pieces on one plate even now. This type of sushi is called “hayazushi” (早鮨) – fast food for people in Edo City.

Hanaya Yohei  (華屋 与兵衛,1799–1858) is generally known as the inventor of today’s Tokyo-style nigirizushi (Edomae-zushi; 江戸前寿司). He had been successful to introduce the modern style of sushi that is widely recognized around the world.

To prevent spoilage, Hanaya Yohei marinated the fish in soy sauce or vinegar. It was quite reasonable for people who are not fond of eating the fatty meat of tuna. His sushi was totally different from today’s “raw fish” stereotype.

The word “寿司” was gradually used to describe sushi as an exquisite delicacy or cuisine which was consumed at anniversaries. As time passed, this word, “寿司,” has been used to express sushi in general.

Now we use both “鮨” and “寿司,” however, there is almost no difference in its meaning.

Accompanied with the ice industry or refrigerator, sushi can offer various menus such as “Toro,” a fatty tuna part, and even more expensive delicacy.

As a result of the great Kanto Earthquake and later World War II, many sushi chefs had to leave Tokyo, so they returned to their hometown and started sushi shops there. In this way, the technique and the taste of Edomae Nigiri was expanded. However, the food shortage after World War II made this food more small-sized, expensive, and luxurious.

How to eat sushi properly

To eat sushi properly, there are some rules and etiquette for customers. However, these rules should be regarded as a model of Japanese custom, not a must-do.  Generally, start by eating fish with a lighter flavor like white fish and move onto fish with a rich taste such as tuna. And then have egg as a dessert, finishing with seaweed rolls at the end is a typical way.

At an authentic sushi bar, you should obey the etiquettes above to savor sushi more comfortably. Make sure to keep quiet and follow the etiquettes they offer to help you learn and understand Japanese cuisine culture more because every rule is related to savoring the dynamic balance of sushi delicacy.

Sushi Returned to the Common People in Japan

In 1958, a Kaitenzushi restaurant, Mawaru Genrokuzushi, (廻る元禄寿司), a conveyor-belt sushi bar, started its business in Osaka. This was a strategy to save the shortage of workforce and derived the idea of conveyor belt at the beer industry. However, the unique system of self-serving plates of sushi and its inexpensive price gained great popularity and later expanded throughout Japan.

In a sense, their menu is now free from tradition or regulation, so unique sushi such as hamburg steak sushi, or even sweets or beverages are served. It looks like a chain restaurant for families to visit without strict rules and high prices.

Siblings of Sushi Outside Japan

When hearing the word “sushi,” it probably reminds people of a combination of rice and seafood. Now sushi is a worldwide delicacy, and there are a bunch of types of sushi which even Japanese people cannot think of. They are definitely siblings of our sushi (寿司) which have grown outside Japan.

Sushi has two faces now: one is an exquisite and expensive delicacy which we can savor a few times in a year, and the other is an inexpensive fast food that we can eat almost every day. In my opinion, both types of sushi have a great combination of the rice and a topping which gives us a delight of eating this food everywhere and every time. This is a great fact to share with many people who love Japan.